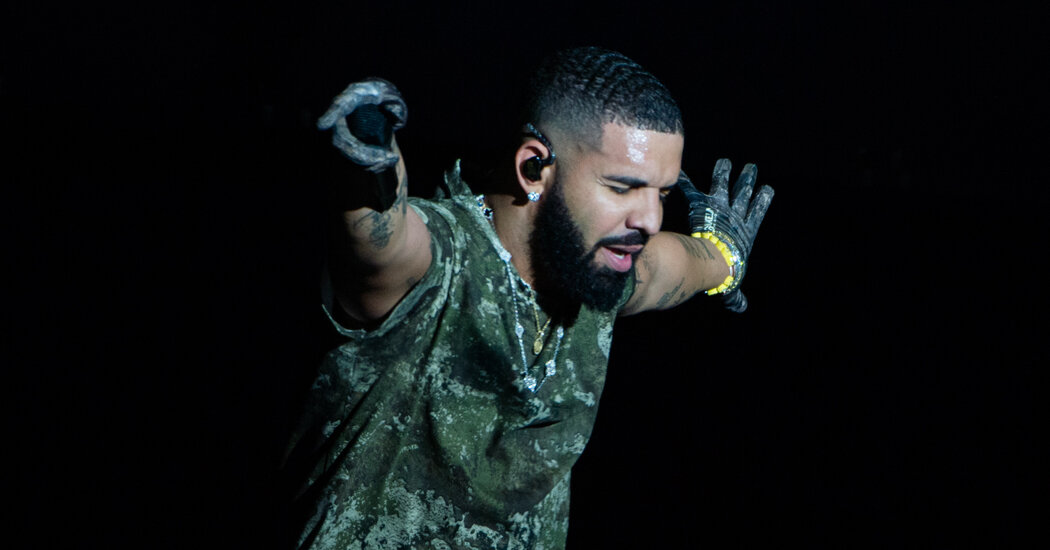 Less than 10 months after “Certified Lover Boy,” Drake has returned to monopolize summer. His surprise-released seventh album, “Honestly, Nevermind,” is a balmy mood piece —somewhere between a D.J. mix and one very long song — and after a series of weighty, overstuffed albums, it’s refreshing to hear him return to a lighter register, à la the 2017 mixtape “More Life.” (As I type this, “Passionfruit” is trending on Twitter.) Drake showcases his softer side on highlights like the club-ready, house-influenced “Massive,” and the pensive, tuneful “Overdrive,” one of several tracks partly produced by the South African D.J. Black Coffee. And though “Honestly, Nevermind” finds Drake singing more often than not, those who prefer his rapping will appreciate the relentless flow of “Sticky” and the cheeky closing track “Jimmy Cooks,” which features a sharp verse from 21 Savage.

But it’s the kinetic “Falling Back,” the album’s first proper track and single, that best sets the scene: A throbbing electronic beat (produced by the D.J.s Rampa, &Me, Alex Lustig and Beau Nox) allows Drake the space for some Auto-Tuned crooning about — what else — a once-promising relationship turned sour. “How do you say to my face, ‘Time heals?’” he sings in a reedy, vulnerable falsetto, “Then go and leave me again, unreal.” The track’s video, though, is more of a lark, playfully sending up Drake’s heartbreaker reputation and imagining a time when he finally settles down and gets married — to 23 different women. Quips his mother, Sandi Graham, “I think he’s really taking these ones seriously!” LINDSAY ZOLADZ

The polysyllables fly fast, then go on to accelerate wildly in “Progressive House, Conservative Ligature” by the Los Angeles rapper Rhys Langston, from a coming album called “Grapefruit Radio.” The producer Opal-Kenobi supplies loops of blurry, undulating piano chords and synthesizer swoops, shifting pitch every so often. Langston syncopates his verbal abstractions in double time and then triple time, delivering conundrums like: “Creative manners to skip and erase from moment to moment/abstract, realist, most problematic version of futurism.” It’s both virtuosic and defiantly nonchalant. JON PARELES

“I didn’t think you’d fall in love — you’re just a warm body to hold,” Bea Kristi sings on “10:36,” a tale of an emotionally lopsided relationship that will appear on her upcoming second album, “Beatopia.” Her feelings may be indifferent, but the song itself is exuberant — a bright, hooky blast of lo-fi pop propelled by punchy percussion and a bouncy chorus. ZOLADZ

The Beths, ‘Silence Is Golden’

Elizabeth Stokes is desperate for some peace and quiet on “Silence Is Golden,” the latest track from the New Zealand rockers the Beths and the first single from their forthcoming third album, “Expert in a Dying Field.” Antic percussion and squalling guitars mimic the anxiety induced by an avalanche of urban distractions, like sirens, jet planes and “6 a.m. construction”: Sighs Stokes, “It’s building and building and building until I can’t function at all.” She finally gets what she’s after in the final moments of the song, when the instruments suddenly cut out and she’s left to repeat the chorus contentedly a cappella. ZOLADZ

Julia Jacklin, ‘I Was Neon’

The Australian songwriter Julia Jacklin doesn’t get very specific about the relationship she’s apparently left behind in “I Was Neon.” All she offers are hints like, “I was steady, I was soft to the touch/Cut wide open, did I let in too much?” Midway through the song, she arrives at the more important question: “Am I gonna lose myself again?” She repeats it more than a dozen times over an unswerving drumbeat and a language of rock obsession that dates back to the Velvet Underground — two drone-strummed electric guitar chords — with more guitars and voices arriving to wrangle over whether she’ll stay trapped in past habits. PARELES

Mike Hadreas’s sixth and most abstract album as Perfume Genius, “Ugly Season,” is a work that entwines sound and movement, as he began composing it as an accompaniment to the choreographer Kate Wallich’s 2019 piece “The Sun Still Burns Here.” The beautifully spooky “Photograph” has the feel of a ghostly waltz: Drifting synthesizer riffs and groaning ambience provide the backdrop for Hadreas’s darkly romantic croon — “no fantasy, you were meant for me,” he sings — that adds yet another layer to the song’s lush, beguiling atmosphere. ZOLADZ

Even if FKA twigs weren’t suing Shia LaBeouf for sexual battery, “Killer” would be chilling. “I don’t want to die for love,” she sings in her highest, most fragile register. The track is starkly transparent — keyboard chords, electronic blips and drums, sustained bass lines, multitracked vocals, dub echoes — with a terse pop structure of short phrases and repeated intervals; she sings about attraction, intuition, self-doubt, denial and gaslighting. It’s an elegant crystallization of pain. PARELES

The Norwegian electronic duo Röyksopp periodically sets aside dance beats for ballads. That’s what it does on “Sorry,” an abject apology that arrives as a preview of its next album, “Profound Mysteries II.” It begins with melancholy piano chords reminiscent of Erik Satie, then opens up a bassy abyss as Jamie Irrepressible — the British singer Jamie McDermott — thoroughly indicts himself for abandoning a lover: “I hate myself for running scared,” he croons. “No heroics, I know, will bring you back.” For the last half of the song, all he can do is repeat, “I’m sorry.” PARELES

Alanis Morissette arrived in the 1990s as a voice of righteous wrath and determined self-rescue. Her pandemic project has been “The Storm Before the Calm,” an album of wordless meditation tracks striving for serenity. It’s a collaboration with Dave Harrington, who has worked with Nicolas Jaar in the psychedelic rock project Darkside. “Heart — Power of a Soft Heart” has uplift built into its foundation — three slow, ascending piano notes that are repeated throughout the track and enfolded in other tones: chimes, cymbals, hovering guitar notes and Morissette singing “ah,” sustaining a magnificent hush. PARELES

Vadim Neselovskyi’s third-stream pianism shares the qualities of a sculpture carved in ice: finely wrought detail, sharply traced; glinting elegance; coolness to the touch; refractions of light. His right and left hands converse with each other in eager, enchanted dialogue. Since moving to the United States two decades ago, Neselovskyi has collaborated with leading elders in jazz, like Gary Burton and John Zorn, but on his new album, “Odesa: A Musical Walk Through a Legendary City,” he sits alone at the piano. The record is a tribute to the Ukrainian seaport where he was raised, and although he composed the suite in 2020 based on personal inspirations — remembering his childhood there, as his father, a Ukrainian Jew, fought cancer — the album inevitably takes on a different cast now that this Russian-speaking, cosmopolitan city is in the throes of war. Before he joined the New York jazz world, Neselovskyi was a classical prodigy; “Waltz of Odesa Conservatory” calls back to the 1990s, by way of some Baroque piano turns, when he was the youngest student ever admitted to the school. GIOVANNI RUSSONELLO