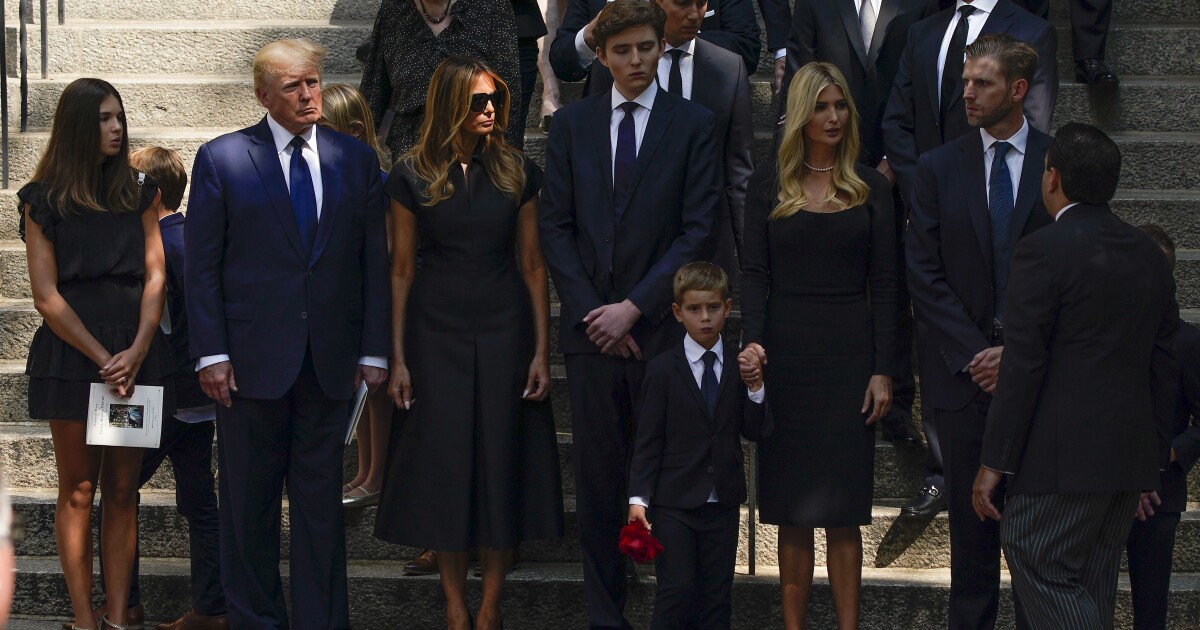 NEW YORK — Ivana Trump, the 1980s style icon and businesswoman who helped Donald Trump build the empire that put him on a road toward the White House, lived a “beautiful life,” the former president recalled as loved ones paid final respects to her Wednesday.

The ex-president joined all his children, an array of other relatives and friends at a Manhattan church for Ivana Trump’s funeral Mass.

“A very sad day, but at the same time a celebration of a wonderful and beautiful life,” he wrote on his social media platform, Truth Social, before he, former first lady Melania Trump and their son, Barron headed to St. Vincent Ferrer Roman Catholic Church.

Ivana and Donald Trump’s three children — Donald Jr., Ivanka and Eric — stood with their father and their families as the gold-toned casket was carried from St. Vincent Ferrer Roman Catholic Church in Manhattan. Eric Trump briefly put an arm around his sister’s shoulders as she held the hand of one of her small children, who clutched a red flower.

Tiffany Trump, the daughter of the former president and his second wife, Marla Maples, also attended the service, as did family friends including Jeanine Pirro, co-host of Fox News’ “The Five,” and Charles Kushner, a real estate developer and the father of Ivanka Trump’s husband, Jared Kushner. Fashion designer Dennis Basso, a longtime friend of Ivana Trump’s, was also among the mourners.

The Mass was “an elegant, wonderful send-off for Ivana Trump,” longtime friend R. Couri Hay said as he emerged.

Trump’s family announced Thursday that the 73-year-old had died at her Manhattan home. Authorities said the death was an accident, with blunt impact injuries to her torso as the cause.

Ivana and Donald Trump met in the 1970s and were married from 1977 to 1992. In the 1980s, they were a power couple, and she became well known in her own right, instantly recognizable with her blond hair in an updo and her glamorous look.

Ivana Trump also took part in her husband’s businesses, managing one of his Atlantic City casinos and picking out some of the design elements in New York City’s Trump Tower.

Their very public divorce was ugly, but in recent years, they were friendly. Ivana Trump was an enthusiastic supporter of Donald Trump’s 2016 presidential campaign and said they spoke on a regular basis.