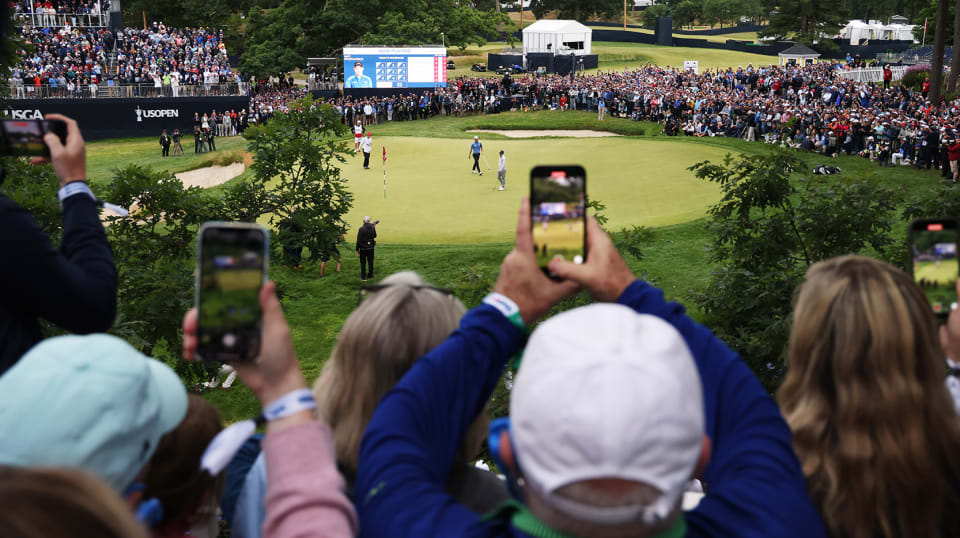 Editor’s note: Joe Posnanski has been named national sportswriter of the year by five different organizations and won two Emmys as part of NBC’s digital Olympics coverage. He is the author of five books – most recently “The Baseball 100,” released in 2021 – and can now be read at joeposnanski.substack.com.

For the record, I am surely not the only golf writer on earth who does not actually play golf. Surely. Yes, it’s true, I don’t know that I’ve ever actually MET another golf writer who doesn’t play golf. But surely he or she exists.

The last time I played a round of golf — and I promise you that at some point this will wind back around to Matt Fitzpatrick and something extraordinary that happened at the U.S. Open — was 30 years ago. It’s a story. See, the last time I played golf was 1992, and it was at Augusta National. In those days, I was columnist at The Augusta Chronicle, and the newspaper had this very cool deal where everyone who covered the Masters for the paper got to play a round of golf at Augusta National on the last day before the course closed for summer.

My round there is actually kind of legendary. I shot 72. On the front. That’s not a joke. Well, it is a joke, but it’s a true joke. I was out there with a starter set of clubs (a driver, 3-iron, 5-iron, 7-iron, 9-iron, wedge and putter). On the first hole, I five-putted from the fringe — which means that if they had put the tee on the fringe, I still would have bogeyed the hole.

I was so bad out there that — this is absolutely true — the newspaper changed the rules so that in order to play at Augusta National, newspaper employees had to play in a qualifying tournament.

In any case, that was the last time I played a round of golf*, and yet I’ve written literally thousands of golf stories since then. I’ve written the back page column for Golf Magazine. I’ve covered Masters, U.S. Opens, Open Championships, PGA Championships, Ryder Cups, lots of other events, I wrote a book about Tom Watson and Jack Nicklaus, I’m just saying it’s weird. I love golf. And I don’t play.

*I would be remiss if I did not point this out: I did not actually play all 18 holes. A friend of mine at the paper was getting married, and we had to leave after 16 holes in order to make the last ferry to his wedding locale. So I guess, technically, speaking, I’ve actually NEVER played a full round of golf.

So … how to explain? Well, the easy way to explain it is that I also don’t play, say, football but love writing about it … but I don’t think that gets at it. Golf is a personal game in the way that football is not. You don’t see football writers standing around team practices pretending to throw footballs. But you pretty much NEVER see three golf writers in one place where one of them is not swinging an invisible club.

Golf writers, many of them, wear spikes.

No, the better explanation, I think, comes down to Sunday afternoon, a slowly fading sun in Boston, an English golfer named Matt Fitzpatrick in the very last place on earth he wanted to be: a bunker off the 18th fairway.

I told you we’d get to the tournament eventually.

Fitzpatrick is 27 years old and, before Sunday, he had never won a tournament in the United States. He’d won a few times internationally and was ranked in the top 20 in the world, but the U.S. thing was a strange deal. He’d played in more than 100 PGA TOUR events since turning pro as a 20-year-old, and it just seemed odd that someone with his game, his touch around the greens, his brilliant iron play, his meticulous golfing mind*, couldn’t quite break through and win in the states.

*According to Golf Digest’s Dan Rapaport — a close friend of Fitzpatrick’s — Matt has charted literally every single shot he has hit since he was 15 years old.

He has had a lot of top-10 finishes. But something would keep him from the top. He had a chance at the PGA Championship last month but couldn’t quite hit the shots he needed on Sunday — particularly on the relatively easy 17th hole — and finished two shots back.

Sunday at The Country Club of Brookline, he played the round of his life. He would end up hitting 17 of 18 greens, which is just an incredible achievement at a U.S. Open with the rough high and the greens hard and the pressure turned up to 11. Though there were several supporting actors, Sunday’s round really came down to three players — the No. 1 golfer in the world Scottie Scheffler, the hard-luck Will Zalatoris (who is only 25 but has already finished second at three different major championships) and Fitzpatrick. All three made it to 6 under par at some point in the round, and all three felt the loss of oxygen at that height and fell back.

One of my favorite golf stories is the one about Dr. Gil Morgan in the 1992 U.S. Open at Pebble Beach. He was basically unconscious for the first two rounds — could not miss — and after seven holes on Saturday he stood at an astonishing 12-under par. He was the first golfer EVER to get to a double-digit-under-par score at a U.S. Open.

Then on one of the next two holes, he short-sided himself on a green, found his ball in some sort of hornet’s nest of rough and faced some absurd downhill shot where it was literally impossible to keep the ball on the green.

That’s what it seemed like 6 under was this week — it’s like the Country Club was saying, like God in the Book of Job, “This far you may come and no farther.”

Scheffler got to 6 under after birdieing four of his first six holes. But he then made back-to-back bogeys on 10 and 11 — missing a super-short put on the 11th — and though he had chances, could never get back to that magical 6 under.

Zalatoris got to 6 under on the 11th hole. He promptly bogeyed the 12th. He too could never get back to 6.

But Fitzpatrick was not about to let it happen to him again. He got a great break on the 15th hole. He and Zalatoris were tied at 5 under as they teed off No. 15. Both hit their drives way right, which is a death sentence on that hole. If anything, Fitzpatrick’s shot was significantly worse — his shot was WAY right.

But sometimes in U.S. Open golf, worse is better. Zalatoris’ ball ended up in thick rough the best he could do was muscle it out into a bunker. But Fitzpatrick’s ball was so far right, it ended up with the gallery, where the grass had been trampled down. Fitzpatrick took advantage, hit a brilliant approach shot, made the long birdie putt and he reached that magical 6 under par number.

Now, all he had to do was hold it for the final three holes.

And this — THIS — is why I love golf, even if I don’t play the game. I love it because it is, I think, the best sport in the world at revealing how someone will stand up against pressure. In team sports, you can lean a bit on your teammates. In tennis — the sport I do play — there is certainly plenty of pressure, but the action moves so quickly that you often don’t even have time to think about it.

Fitzpatrick held up against the pressure — until his tee shot on 18. He led by one shot. And then, not unexpectedly, he hooked his drive into a bunker, absolutely the one place he could not hit it. Fitzpatrick is a great golfer with all the shots. But the one shot he hates most of all is, you guessed it, hitting approach shots out of fairway bunkers.

And this one was particularly nasty because there was a hump in front of his ball, preventing him from trying to hit the ball at the pin.

Will Zalatoris looked at the ball and the lie and the angle and thought it was, at best, a one-in-20 shot.

Yes, this is what I love about golf. There’s no hiding from the pressure. Matt Fitzpatrick was going for a little piece of golf history — he was trying to win the U.S. Open, win for the first time in the U.S., become the first English golfer to win the Open since Justin Rose almost a decade ago and only the third English golfer to win it since 1925.

Also, there is this fun little fact: Fitzpatrick won the U.S. Amateur at The Country Club. The only male golfer to win a U.S. Amateur and U.S. Open at the same course was Jack Nicklaus.

You would hope and expect that none of this was playing in Fitzpatrick’s mind as he set up for the shot. He talked it over a bit with his caddie Billy Foster. Then he stepped into the bunker, took a few seconds to get his mind clear, and he hit the shot.

It was as pure as pure can be. Tom Watson will tell you that when he hit his purest shot — the 7-iron he hit on the 18th hole at Turnberry in The Duel in the Sun against Nicklaus — he thought the ball looked like a piece of art against the Scottish sky. In good times and bad, he would think back to that shot and the way the ball looked.

And I imagine Matt Fitzpatrick will do the same. His shot faded beautifully, landed softly on the green, and set him up for an easy two-putt par that would keep him at that magical six-under-par. As it turned out, Zalatoris had one final shot to get to 6 under himself, but his final putt rolled just left of the hole. And Fitzpatrick had won.

There is something stirring about seeing someone display grace under pressure. Heck, that’s what all of Hemingway’s books are about. That’s why I love golf. After it was over, Fitzpatrick was asked that most ubiquitous and silly of questions: “How do you feel?”

He gave the only answer there is to give. He said: “There are no words.”