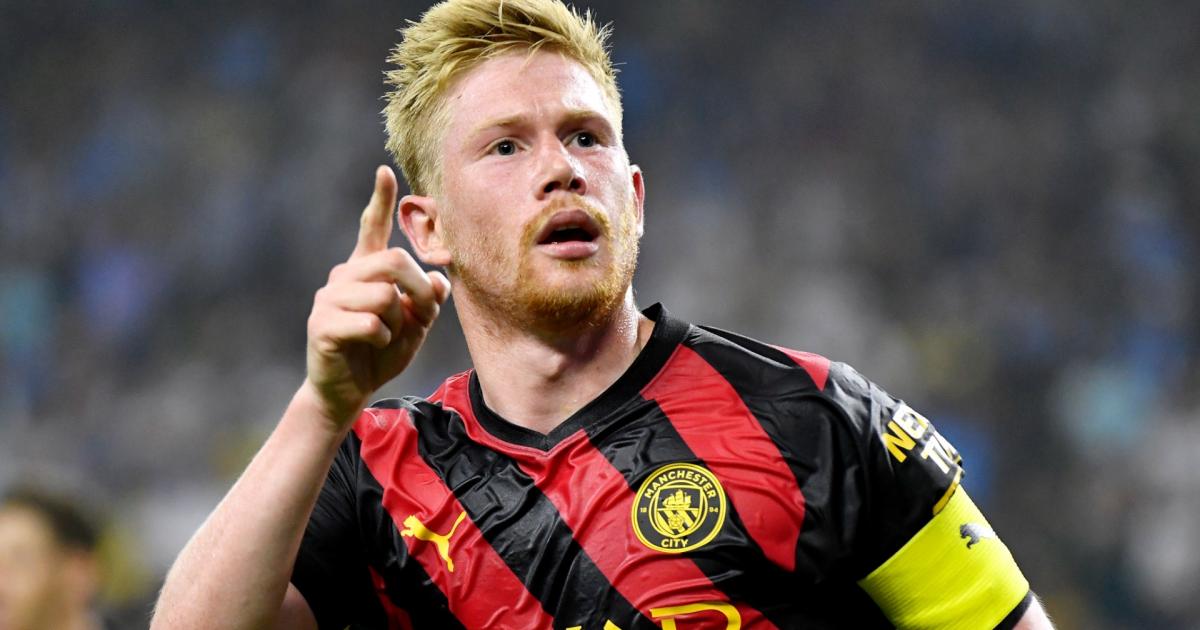 Haaland was expected to make his much-anticipated debut at NRG Stadium, but he was kept on the bench, with the cameras showing him seated next to center back Ruben Dias, who was not part of the matchday squad. No official word from Man City as to the reason Haaland was kept out of the action.

While the attention was on the new players, it was old reliable Kevin De Bruyne who accounted for both Man City goals. The team captain pushed up from his attacking midfield position to create his own shot on the first goal, and then he ran onto a ball from Riyad Mahrez and ‘megged the ‘keeper just before halftime.

Three Man City players who did manage to make their debuts were former River Plate star Julian Alvarez, goalkeeper Stefan Ortega, and Kalvin Phillips, who started at center back before moving into his preferred central midfield spot. Alvarez was the center forward at the opening whistle, but didn’t get any good looks as De Bruyne claimed the headlines with his trademark runs from midfield.

MORE: Is Erling Haaland Man City’s most expensive signing ever?

How Julian Alvarez fared on his debut

The former River Plate man did not score, assist or generate goal-scoring opportunities for himself, but it was a solid debut nonetheless. He showed that he was up for the fight against an aggressive Club America side that wasn’t backing down.

Alvarez kept the center backs occupied, bringing his teammates into the attack and setting them up for shots. With Kevin De Bruyne showing he’s back to being a threat from midfield, the debutant didn’t have to do much more.

The quality of the field, the scrappy game that unfolded, and the fact that it was the first preseason match weren’t the type of conditions to allow for the Argentine to show off his full array of talents, but his 71 minutes were positive. He showed he could have a role on this team in 2022/23 depending on the type of match.

Similar to Alvarez, the other debutants were solid though unspectacular, filling specific roles on the team and doing their job. And that’s all they’ll be asked to do this season.

Ortega was the sure-handed, stay-at-home ‘keeper who responded to the handful of tests from Club America throughout the 90 minutes. He had the air of a goalkeeper with personality, and he wasn’t fazed by the occasion. At 29, and with years of Bundesliga experience under his belt, it’s not a surprise.

We also got an early look at the versatility that Kalvin Phillips could be asked to showcase during 2022/23. The 26-year-old was dependable in both positions he’s played. An emergency center back during his Leeds days, he started the second half there and then moved into midfield as the subs were introduced in the second half. He showed he’s ready to make a contribution.

With all the buzz around the new kids to join the club, Kevin De Bruyne showed why he wears the captain’s armband for City. He’s as opportunistic as midfielders come, sensing the moment to push up and usually making it count.

Those instincts made De Bruyne the highest scoring midfielder in the Premier League in 2021/22 and his 15 goals didn’t come with a single penalty conversion. Club America became his latest victim on Wednesday.

Fulltime: There was very little that happened for the rest of the match after Jack Grealish and Kevin De Bruyne were subbed out in the second half. It became a showcase of academy players on both sides, but none were able to make a difference.

The final result was fair: It was an evenly played match, but Man City’s quality won out in the end. The likes of De Bruyne, Grealish, and Riyad Mahrez are simply a class above.

90th min.: Miguel Layun pushes into the attack and takes a shot at the Man City goal. Club America look most likely to score toward the end of this match. Two minutes of stoppage time.

79th min.: What a play by young America forward Roman Martinez. The cross into the box, however, was easily handled by the Man City defense. That was one of the highlights of this second half.

77th min.: Man City SUBS —Rico Lewis and Kayky are on for Bernardo Silva and Jack Grealish, who had an eventful night.

75th min.: Josh Wilson-Esbrand on the left with the cross that finds Cole Palmer but he can’t get it on goal.

59th min.: Jack Grealish is going to lose it. He endures this foul from Bruno Valdes, who’s officially under his skin.

Took a page out of my book pic.twitter.com/qVaMQv8nFN

55th min.: Jack Grealish again in the mix and he wanted a penalty, but didn’t get it and he has words for the referee. Kevin De Bruyne follows up that instance with another shot that the ‘keeper stops.

51st min.: Great chance for Jack Grealish, but the ball is stopped by the America ‘keeper.

46th min.: Second half is underway in Houston. Erling Haaland is still on the bench captured sitting alongside Ruben Dias, who’s not in the squad.

46th+ min.: Another Kevin De Bruyne goal! Mahrez with an exquisite pass into the box for the onrushing De Bruyne, who finishes expertly.

43rd min.: Henry Martin goal for Club America! He beats the offside trap and spins Nathan Ake around before firing on goal. Stefan Ortega gets a touch on it, but the ball still rolls into the net.

30th min.: Kevin De Bruyne goal! He gets by a couple of defenders with the help of a fortunate bounce and then curls the ball like only he can past ‘keeper Memo Ochoa.

25th min.: Jack Grealish and Memo Ochoa go nose to nose in the America box! Grealish thought he had suffered a penalty kick foul which wasn’t called. Ochoa tried to help him up, but Grealish didn’t want any part of it.

18th min.: Yellow card to Club America center back Emilio Lara for a hard foul on Jack Grealish about 25 yards from goal. But the set piece goes off the wall.

15th min.: There it was for Club America in transition. It started with Alejandro Zendejas on the right, and the ball gets to Alvaro Fidalgo who fires on goal. Man City ‘keeper Stefan Ortega with another stop in his debut. But Fidalgo is entertaining:

11th min.: The Man City possession game is back. The club is patiently knocking it around. Club America are waiting for their chance to get it back.

3rd min.: America with the early chance! On the set piece Man City debutant goalkeeper Stefan Ortega has to make a stop on the Luis Fuentes header. It was Riyad Mahrez who was beat for that header in the box.

1st min.: We’re underway in Houston and Club America come out strong. They win a set piece in the attacking half.

5 mins from kickoff: It’s a packed house under the roof at NRG Stadium.

Ederson getting warmed up on an interesting-looking pitch #mcfc pic.twitter.com/Ro4pGBucFn

Man City will be wearing their new red-and-black away kit tonight against Club America. It has already broken club records for opening-day sales (as the home one also did) https://t.co/0DuLSDvzZC

53 mins from kickoff: It’s Erling Haaland’s birthday today. We’ll see if he can get a goal to celebrate.

120 mins from kickoff: With Julian Alvarez plastered across the promotional images, it’s safe to say we’ll be seeing the ex-River Plate man on the field.

Remember, you can watch our game against @ClubAmerica exclusively on CITY+ everywhere, except the US and Mexico 📺⏯

Erling Haaland started on the bench for Manchester City as Julian Alvarez got the nod at center forward between Riyad Mahrez and Jack Grealish. Newcomer Stefan Ortega started in goal with Nathan Ake and academy product Luke Mbete in central defense.

Ruben Dias was not named to the squad. Phil Foden, John Stones, Aymeric Laporte, and Ilkay Gundogan did not travel to the USA, with The Athletic reporting that Gundogan’s vaccination status was the cause.

Club America head coach Fernando “Tano” Ortiz switched up a good chunk of the team that started against Chelsea, spreading the workload across the squad. Uruguayan attacker Federico Vinas was out against Chelsea and reports indicated that Roger Martinez (injury), Salvador Reyes (injury), and Jorge Mere (coach’s decision) did not travel.

MORE: How Erling Haaland will fit in at Manchester City

UK and Australia: The friendly between Man City and Club America will be carried by Man City’s City+ streaming channel.

USA: The match is available on ESPN2 (English-language) and TUDN (Spanish-language) with both channels streaming on fuboTV.

Canada: The Man City summer friendly will be carried by City+ and DAZN.

UK: Matches are carried across Sky Sports and BT Sport streaming and TV platforms, with select matches on Amazon Prime.

USA: Select matches are televised on USA Network (English) and Telemundo or Universo (Spanish), and all three channels can be streamed on fuboTV. The rest of the matches are streamed on NBC platform Peacock for subscribers.

Canada: Every Premier League game streams live and on demand exclusively via fuboTV.

Australia: Fans in Australia can stream matches live and on demand on Optus Sport.