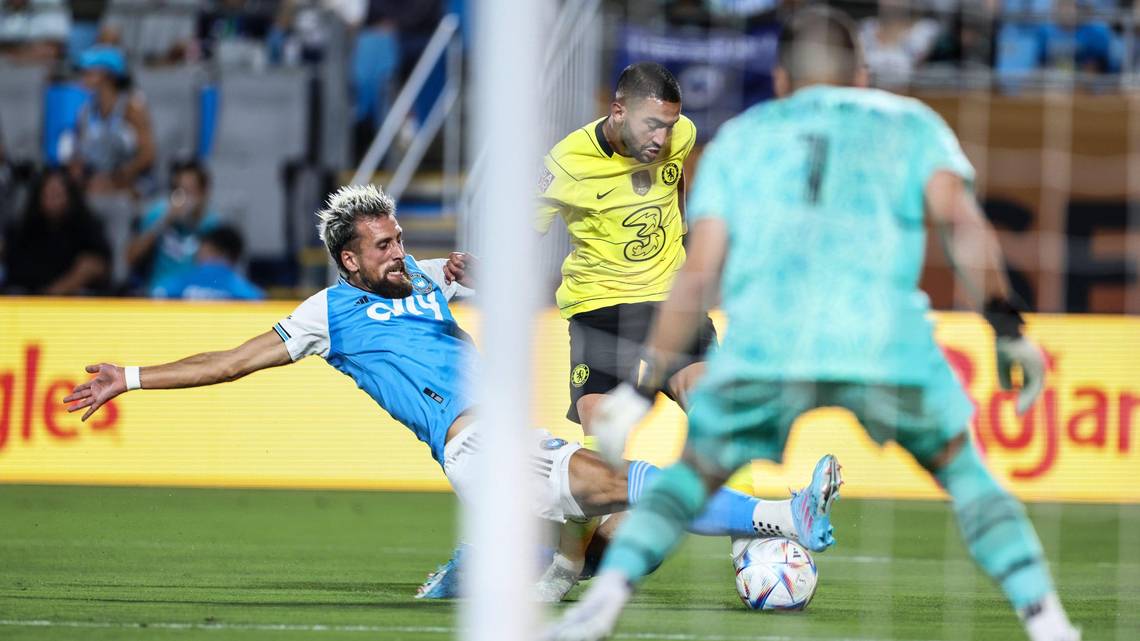 Two shades of blue mixed together as a crowd of fans sheltered in the Bank of America concourse, waiting for thunderstorms to clear from the rapidly darkening sky.

Charlotte FC supporters wore sky-blue kits while Chelsea supporters opted for navy jerseys in a Charlotte victory due to penalty kicks (Charlotte FC had a 5-3 edge in penalty kicks, after a 1-1 tie in regulation) in a game that started about an hour late due to thunderstorms. A number of North Carolina natives attending the game found themselves cheering against the home team and instead took the opportunity to watch their favorite team, one they’d rarely seen play in person.

Wednesday marked Chelsea’s first match in Charlotte since 2014 when they played Paris Saint-Germain. The years gave fans who’d seen both a chance to re-evaluate the city’s soccer climate after the introduction of the expansion team.

“When I came for the PSG game, it was kind of just a mixed bag of people here, and here you have plenty of Charlotte fans here, Chelsea fans here, it’s just a lot of fun.”

Waters, who said he’s been to nearly every Charlotte FC home match, represented a popular demographic at the game: Charlotte natives who supported both teams but instantly knew they’d support Chelsea in Wednesday’s game.

Nathan Wright, 30, and who’s always lived in the area, called the matchup between his hometown team and his favorite team “a little bittersweet” before his fiancée, Kaley Vead, interjected.

“He’s hoping they blow Charlotte FC out,” she said.

“I mean it would kind of look bad if Charlotte FC put up a good performance,” Wright responded before the match.

The young MLS club did, sending a crowd of more than 50,000 into a frenzy as Kamil Jozwiak drove home the fifth and final penalty kick to give Charlotte FC the victory.

Wright’s Chelsea fandom started in middle school when he played the FIFA video games. Vead, 28, also spent her entire life in Charlotte and picked up the fandom from him. Both are Charlotte FC fans but noted their love for Chelsea surpassed that for the home team.

The pair spends almost every Saturday gameday morning, sometimes as early as 7:30 a.m., to go to Jackalope Jacks, a sports bar in Plaza Midwood, and watch Chelsea play.

“Maybe I had a few drinks tonight before but I’m still waking up and watching Chelsea play,” Wright, who showed up in a Didier Drogba jersey, said. “It could be a bad game, but I’m still watching it.”

He cited the time he’d rooted for both teams as justification for his rooting interest. Vead made her case with the star of the US Men’s National Team: Chelsea attacking midfielder Christian Pulisic.

“You have to cheer for Captain America,” she quipped.

Ose Mukenge, a Chelsea fan from Durham, moved to North Carolina from the Congo at 12 years old. He picked up his fandom because of Drogba, the team’s striker. Mukenge’s love for Drogba spanned past his contributions to the Premier League team.

He respected the striker for playing for the Ivory Coast and helping to bring a ceasefire to a civil war.

Mukenge attended the game with his 5-year-old son Owen. The elder Mukenge sported a Thiago Silva jersey, calling the defender an inspiration because of his professionalism and dedication to the sport. Owen wore a customized Chelsea kit with his name on the back and a matching pair of shorts.

“No choice,” Mukenge, who also wore a golden chain with a Chelsea lion pendant, said about his son’s fandom. “He was born with it.”

The 36-year-old had traveled in the past, both within the United States and to London, to watch his favorite team play.

His vast experience with watching the club has given him the unique skill to see a jersey and have a good sense of when it was worn.

As a faded Frank Lampard jersey passed by, he quickly called it out as the one the team wore in 2013, the year after they won the Champions League due to the distinctive golden Adidas logo.

Mukenge still remembers that 2012 victory well. When Drogba’s faithful penalty kick hit the back of the net, he sprinted outside his parent’s house and screamed in the street, a similar reaction to what Charlotte FC midfielder Brandt Bronico, a Chelsea fan, had that year as a boy.

“Me and my friend … we ran outside and we’re like … running down the streets. It was funny, but it was definitely a moment of a lot of happiness,” he said.

Charlotte FC created a similar energy with a 90th-minute game-tying goal from Daniel Rios that sent everyone wearing powder blue into a cheering frenzy. Charlotte ultimately prevailed in penalty kicks as the game showcased the city’s continuously growing soccer culture and engendered hope for the fanbase the home team could create.

“I was here opening night and it was just an incredible atmosphere,” Waters said. “It’s just been fun watching it grow.”

Varun Shankar is a junior at the University of Maryland who’s interning with The Charlotte Observer’s sports section for the summer. He’s a sports editor and reporter for Maryland’s student newspaper, The Diamondback, and a high school sports writer for The Washington Post.