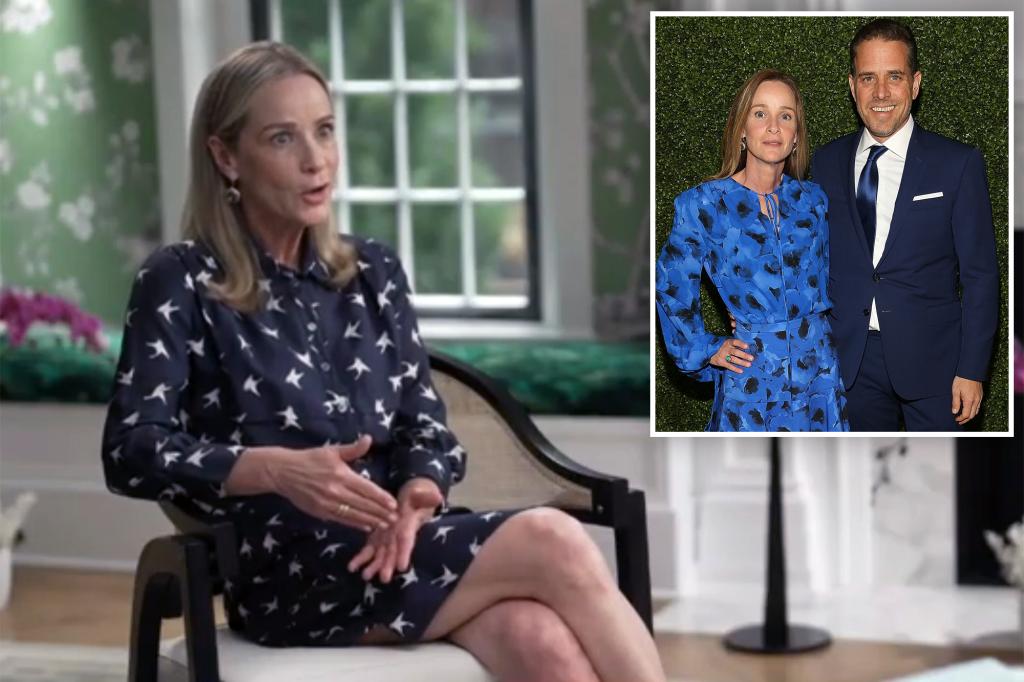 The former wife of disgraced first son Hunter Biden said in her first TV interview Tuesday that she can’t square her former husband with the strung-out pervert revealed in graphic photos and recordings found on the laptop he abandoned at a Delaware computer repair shop.

“We’ve seen images of Hunter, the ones that were on his laptop, looking disheveled. Was that the husband you knew, in moments, at times?” ABCs Amy Robach asked Kathleen Buhle in the “Good Morning America” sitdown tied to the release of Buhle’s memoir, “If We Break.”

“No, not at all,” Buhle responded. “But drugs are awful. He was struggling under a massive drug addiction, and that’s heartbreaking and painful and that wasn’t who I was married to.”

The laptop was the source of The Post’s reporting from October 2020 on Hunter’s overseas business dealings while his father, Joe Biden, was vice president under Barack Obama. It also contained highly personal photos and recordings, including an explicit, 12-minute video that appears to show Hunter Biden smoking crack and engaged in sex acts with an unidentified woman.

The bizarre amateur pornography formed the basis of The Post’s recent exclusive  showing Hunter posing with a gun while cavorting with a nude prostitute.

Hunter Biden revealed in December 2020 that he has been under investigation by federal prosecutors in Delaware over his failure to pay taxes dating back to his father’s time as VP.

Investigators are examining whether the first son and his business associates violated tax and money laundering laws.

The Post reported that Hunter Biden had extensive business dealings in Ukraine, where he had a lucrative seat on the board of energy company Burisma, as well as China.

“If you were called to testify, would you have anything to say?” Robach asked Buhle.

“No. I have buried my head in the sand,” she responded. “I really hope that’s a lesson that women hear: Understand your finances, take responsibility for them.”

At another point in the interview, Robach recalled asking Hunter Biden if he thought he would have been offered a seat on the board of Burisma, which paid up to $50,000 a month, if his last name hadn’t been Biden.

“I don’t know. Probably not. I don’t think there’s a lot of things that would have happened in my life. If my last name wasn’t Biden,” Hunter Biden told her in the 2019 interview.

Robach then asked Buhle if she believed that was true.

“Not entirely. Trying to get someone to parse out what parts of their life, you know, came from their parents is, in my mind, not a healthy exercise,” she responded.

“So I think he has always acknowledged the benefit and advantage of coming from a prominent family,” Buhle continued.

Buhle also admitted Tuesday that she gave Hunter complete control over their family’s finances — calling the decision “embarrassing” before admitting that she enjoyed the perks of being married to a prominent politician’s son.

“It was one of the harder parts for me to write and to acknowledge,” she said, later adding: “It’s embarrassing to say that I ceded all financial control to my husband … I liked the nice things. And I didn’t want to think about the cost at which they were coming.”

Buhle, whose divorce from Hunter was finalized in 2017 after 24 years of marriage, said that writing the book allowed her to realize “how unfair that was to Hunter. And how unhealthy that was for me.”

“The process of writing the book was incredibly cathartic,” Buhle said. “In the course of writing this book, I came to own some of the decisions and choices I made, which was hard.”