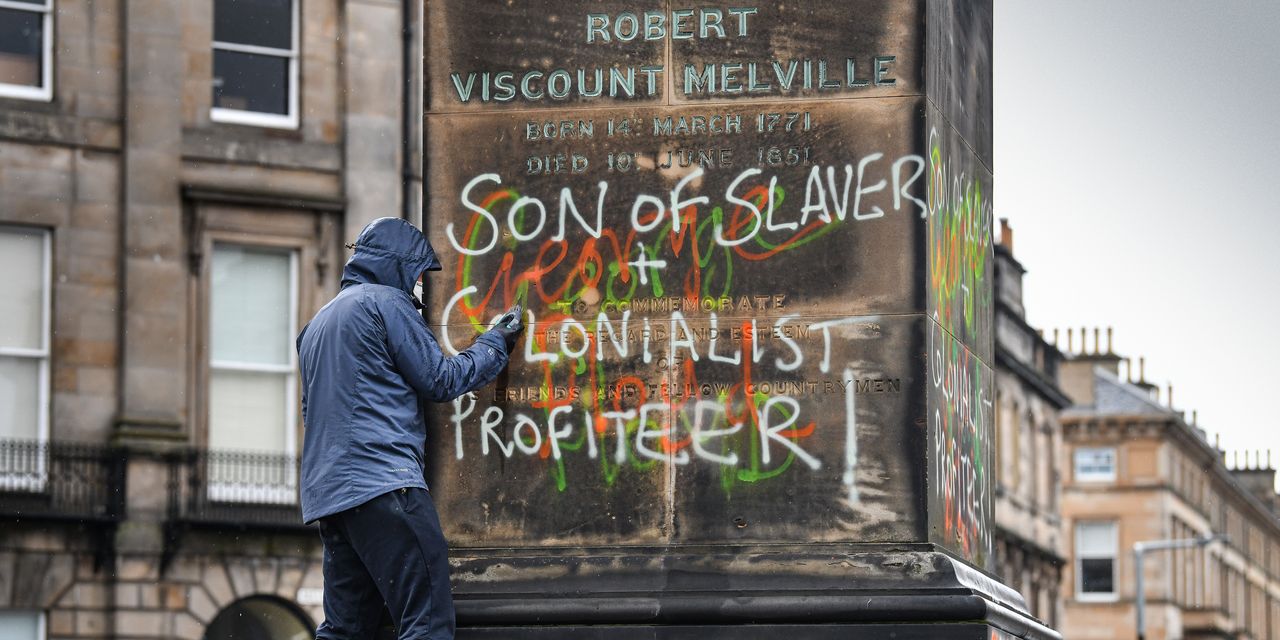 The Value Gap is a MarketWatch Q&A series with business leaders, academics, policymakers and activists on reducing racial and social inequalities.

While slavery in the U.S. was abolished more than 150 years ago, organizations that profited from it still operate today — and it’s in their best interest to fully atone for the past, says Sarah Federman, an expert on the role of businesses in mass atrocities.

One financial-services giant based in the U.K. has set a good example for how to make amends, according to Federman, who is a professor of conflict resolution at the University of San Diego’s Kroc School of Peace Studies and the author of “Last Train to Auschwitz: The French National Railways and the Journey to Accountability.”

The insurance and reinsurance market Lloyd’s of London researched its historical ties to slavery, made those findings available and offered an unequivocal apology two years ago, she said. Lloyd’s also outlined its commitment to develop its talent pool of Black people and other people of color, increase its hiring of people of color and prevent itself from participating in modern slavery through its suppliers or other means.

Federman discussed the atonement efforts by Lloyd’s and other organizations at a House Financial Services Committee hearing earlier this year. Democratic lawmakers from that committee asked major U.S. banks and insurers
XLF,

in a June 7 letter to provide information about any involvement in the financing of slavery, as well as about any racial-equity audits.

U.S. financial companies benefited from the slave trade by selling life-insurance policies on the lives of enslaved people with their owners as the beneficiaries, as well as by extending loans to owners using enslaved people as collateral.

Lloyd’s, for its part, told MarketWatch through a spokesman that it’s “on a journey of research and reflection as we acknowledge our historical connections to slavery.”

“That reflection has made it clear that our historical involvement in the slave trade comes with a responsibility to help repair the damage slavery has caused across society,” the spokesman said. “We are therefore using all the tools at our disposal — from our recruitment targets and internal processes, to our charitable support and community partnership — to address these impacts and help create more equitable outcomes for the communities most affected.”

Federman spoke with MarketWatch ahead of Juneteenth, the June 19 holiday commemorating the last enslaved Black people in Texas learning of their freedom. The interview has been edited for clarity and length.

MarketWatch: You’ve praised how Lloyd’s of London has addressed its involvement in the transatlantic slave trade from insuring slave ships. How would you describe what Lloyd’s has done correctly?

Federman: What they’ve done well — and it may sound small to those looking at the bigger picture, but so few have done this part well — their website has a timeline of their history that is titled, “The transatlantic slave trade.” They don’t hedge it. They don’t say, “Oh, there was just one little uncomfortable chapter. We’re sorry about that.” They actually outline what they did.

They give credit to the anti-racist activism and allies following George Floyd’s murder, although some of it, I think, was even employees in-house. So they actually acknowledge those who brought the issue to their attention and say, “We’ve talked about it in the past, but we haven’t really full-on dealt with it.”

And then they have a section titled “A full apology.” And this was an issue that gets really contested, because any company as much as possible likes to avoid full apologies, because it suggests down the line that there could be some legal liability — or someone that will have to pay. Now, Lloyd’s might be confident that the courts in England will not hold them liable. In the U.S., most companies are going to be protected for the time being, though that might change.

But that full apology is rare. The Baltimore Sun did the same. They made a full apology a few months ago, again kind of saying what their role was and then talking about their commitments.

There’s more they can do on the commitment end. [Editor’s note: Lloyd’s plans include having a third of all new hires come from “ethnic minority backgrounds.”] But I do want to acknowledge their commitment to transparency — they’ve made an apology and they’ve made their archives fully available. Of course, not all companies have archives to make available in that way. But they have and they did.

MarketWatch: What other companies have done a good job of addressing their role in slavery?

Federman: I’m looking right now, and when it comes to [the] finance industry, I’ve not seen it yet. Aetna
CVS,

was forced into it a bit by a lawsuit. [Editor’s note: Aetna has previously said it “may have insured the lives of slaves” and expressed “deep regret over any participation at all in this deplorable practice.”]

My area of research is in who’s doing it well, and it’s a changing conversation. People are starting to step up, and I’m trying to keep track.

Universities, seminaries and museums — they’ve been starting to do this work, and they’ve been having to do more of it because of their commitments to, well, truth and knowledge. So we’re seeing more of that happening there. They are moving it along, and it is going to push corporations to have to do something.

“‘The great leaders deal with the problems that were created for them by other people. And these are just a different kind of problem than businesses are used to thinking about.’”

MarketWatch: What do you say to people who think it’s just not the right approach for today’s corporations to try to address sins from generations ago?

Federman: I understand that people feel that way. I felt that way. I think what changed for me was seeing the legacies and studying them and understanding them better.

I also think about how when you become president, you inherit the history of your country — all the glories and all the traumas. Presidents and leaders are asked to atone for these pasts — to make apologies. In the business area, no manager comes into a corporation and says, “I don’t need to deal with the problems created by my predecessors.” Because you’re going to be inheriting some unmotivated office or failed product line.

There’s going to be something. The great leaders deal with the problems that were created for them by other people. And these are just a different kind of problem than businesses are used to thinking about. But more of them are. More corporations are starting to understand their moral role in the world. That’s why they’re pulling out of Russia. They’re seeing themselves as ethical actors.

Related: Companies that exited Russia after its invasion of Ukraine are being rewarded with outsize stock-market returns, Yale study finds

MarketWatch: To what extent are corporate leaders seeing things your way? Would you say that 10% or 20% accept your view now, up from maybe 0% around two decades ago? Or what would be your estimates?

So part of what I’m saying is, it’s coming. The moral tenor of our times has changed. Where do you want to be in it? Do you want to know your history, and do you want to deal with it? Or do you want to have someone else shame you and take you down? It’s much better when you apologize before people are telling you that you should apologize.

So I say to the corporations who don’t believe it should be done: It’s just how do you want to manage this particular moment.

and founder, recently gave an interesting talk. He was saying that when he went to school in the ’80s, it was all shareholder capitalism, but it’s shifted to stakeholder capitalism, and many of the CEOs he knows are starting to really see their companies as doing good in the world and having a moral role in the world.

So maybe it’s 10% who understand the history, but I’d say it’s 50% or more that are thinking about how they’re being perceived as moral actors in the world.

MarketWatch: You have a four-step plan for companies. First, commission an independent study of your company’s history, then update your company’s origin story based on the findings. Next, make a public statement about the history, and finally, engage with affected communities to develop a meaningful response, such as a commemoration, compensation or other programs. What kind of feedback have you gotten on this plan?

Federman: There’s of course a resistance in organizations to sharing their histories and their archives. They think, “Why should we let people in to do that?”

The other resistance, and one I can really understand having worked in business, is saying, “Wait a minute, we’re trying to survive, right? We’ve got competitors trying to take our clients left and right. It’s brutal out there. We’ve got all kinds of issues, and now you want me to go to the archives and try to figure out what happened to people who are now dead? And then you want me to somehow atone for that? How do we know when we’re done? How do we know when the dead are happy? This is really difficult territory that I’m not prepared to handle.”

So I think that’s part of the resistance, right? Entrepreneurs, business people, look forward. They’re creating, they’re dealing with competitors. They’re looking to the future. Looking back feels really uncomfortable and difficult. So the way I’m presenting it is: When you’re doing your diversity, equity and inclusion work, part of that work is understanding the legacies. Why do we need diversity, equity and inclusion? Because of these histories, and understanding your institution’s role is part of that DEI work, so I would put it under that umbrella.

It’s important for those of us encouraging them to not treat them as the perpetrators themselves. These are not slaveholders. And that sometimes, I think, is important from the activist end. You’re looking for someone to be angry at, but the [present-day] executives at Lloyd’s — they didn’t do it. They just wanted to be in insurance, or whatever it is that drew them to that company.

Opinion: Your workplace is the last best hope for addressing racial inequality