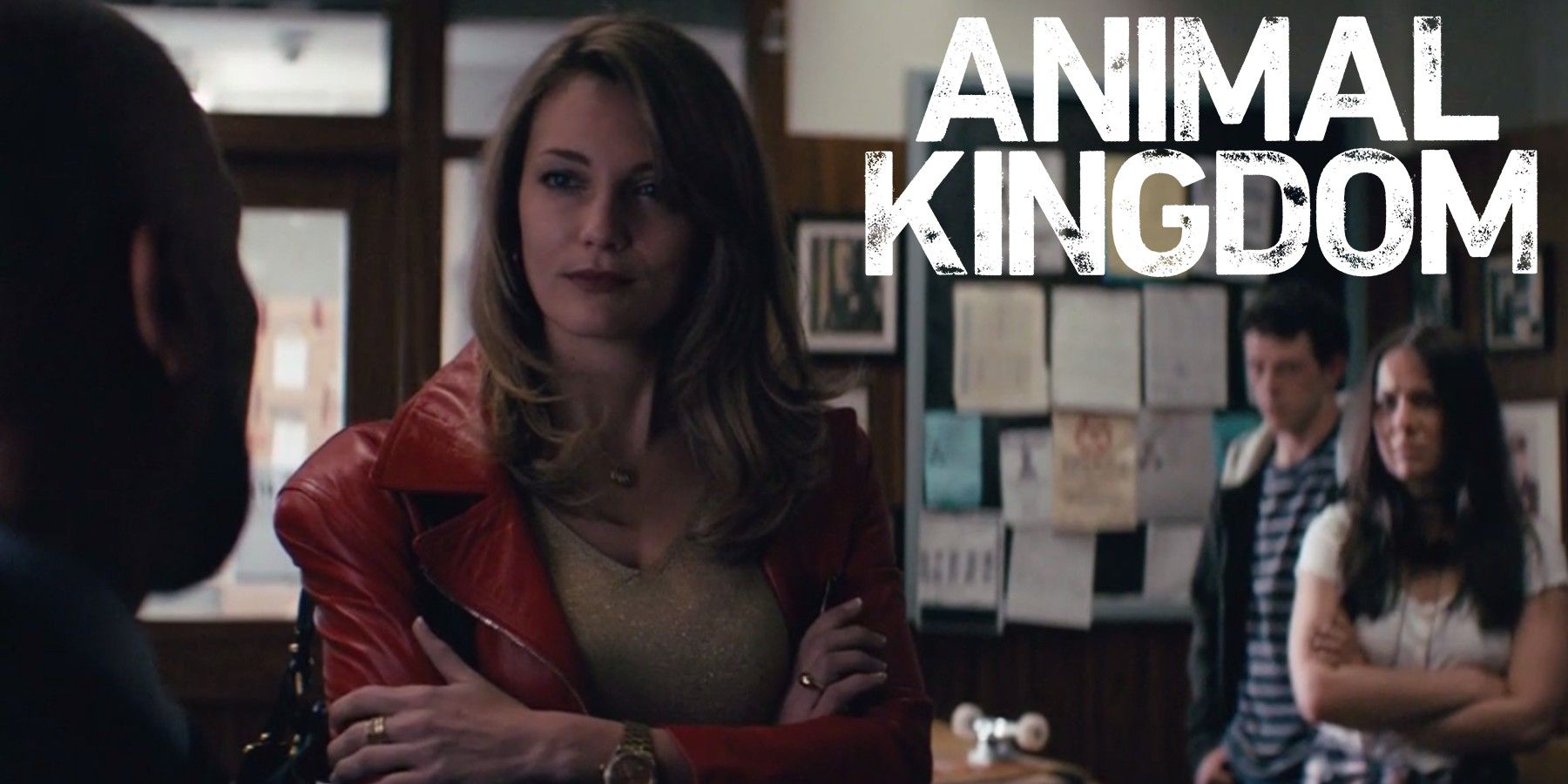 This review contains spoilers for season 6 of Animal Kingdom. TNT’s crime drama, Animal Kingdoms has returned for its sixth and final season, and the stakes have never been higher. Still reeling from the loss of Smurf (Ellen Barkin), the four Cody boys are still working on setting up their own reputations and livelihoods in Oceanside. In the double-headed premiere, the past continues to influence the present and returns to haunt the Codys. In its final run, the TNT crime drama raises the question of whether or not the Codys will manage to make it out of this high-stakes lifestyle unscarred once again.

Of Animal Kindom’s two premiere episodes, “Rise” is certainly the stronger of the two. Narratively, it tells a convincing story about the Codys taking charge of their own lives. Pope (Shawn Hatosy) is seen reviving his love for skateboarding which was tarnished by Smurf as a teenager, while Deran (Jake Weary) finds his footing as a leader within the family. The soft spot he once had for Craig (Ben Robson) has seemingly disappeared, and he’s grown increasingly distant, which makes him more dangerous than he’s ever been. Craig has become far more responsible and distances himself from those who threaten his sobriety. Meanwhile, J (Finn Cole) continues to make his own moves for the benefit of the family with the intent for them to start fresh with new contacts and people on their payroll.

“1992” kicks Animal Kingdom’s final season off with a traditional bang, as the Codys pull their first heist of the season. Unlike many of the previous heists the Codys have pulled, this one comes with a surprising twist. Rather than attacking the competition Gia had hired them to rob, the Codys decide to rob Gia’s business in retaliation for not doing business with them in season 5. The value of this heist isn’t in the jaw-dropping twist, but in the unity it demonstrates amongst the boys. This heist also has the rare occurrence of all four Cody boys working together without any hiccups. Pope and Craig gain entry through the roof of the building, while J covers the sound of their forced entry with fireworks. Deran assists by covering the cameras and serving as the getaway driver. The boys even go a step further in setting Gia’s warehouse aflame, and somehow, the job still goes seamlessly.

Unfortunately, not everything is smooth sailing for the Codys. Unable to find support in his family for his desire to keep his sobriety, Craig finds an unlikely ally in a stranger that wanders into his gym. The man operates a bike shop not far from Craig’s newly opened gym, and the two grow closer after learning of their shared sobriety. In typical Cody fashion, Craig questions whether or not the man is truly an ally, and in an effort to prove Craig can trust him, the two rob a restaurant together. Given Deran, Pope, and J’s lack of support for Craig trying to maintain his sobriety, Craig’s newfound friend is likely to reappear throughout Animal Kingdom’s final season in the weeks to come.

Even though he didn’t rob any restaurants, Deran has quite a few memorable scenes in the first two episodes of Animal Kingdom’s final season. Unlike his brothers, Deran is a lot like his nephew with his calm demeanor. In “1992,” Deran is not-so-subtly warned about troublesome influencers in the area and pays them a visit with a calmly composed intimidation scene, that ends with him smashing a glass bottle across the face of one boy, and departing with a wave to Trey, the neighbor. “Rise” features another scene like this, where Deran confronts Brian, an amateur surf promoter from his past. He tazes Brian for taking money from Smurf which led him to lose a number of competitions many years ago and using this revengeful intimidation strategy, Deran gets him to revise an invoice from 18 grand to only a grand.

What stands out in both “1992” and “Rise,” isn’t the heists or the character work, but Animal Kingdom’s use of the flashback sequences. These flashbacks were once used to paint a fuller picture of Smurf in what was Barkin’s final season with the series. Now that enough of Smurf’s history has been discussed, the flashbacks have made a meaningful shift in focusing on the children under her care. As opposed to the young ages these flashbacks had depicted them in, Pope, Julia, and Baz are now teenagers. Pope has been one of Animal Kingdom’s central characters since its pilot in 2016, as was his adopted brother Baz (Scott Speedman), before his death in season 3. Julia, on the other hand, was never officially met in Animal Kingdom until these flashback sequences began in season 4.

Prior to her on-screen arrival, Julia had only been referred to as J’s mother who overdosed in the season 1 pilot, sending J into the care of his estranged grandmother and uncles. In the two short episodes depicting Julia as a teenager, Animal Kingdom has already begun to answer some questions that have lingered about her character. As if her remarks as a child about Smurf’s habits weren’t clear enough, “1992” and “Rise” made a point to address her animosity with her mother, which is partly rooted in Smurf’s own jealousy. These episodes also begin to address the nature of Julia’s relationship with Baz, meaning that before Animal Kingdom ends, these flashbacks should finally answer the age-old question of whether Baz is actually J’s biological father.

Animal Kingdom’s sixth season reinforces that the Codys do not make a habit of forgiving those that have wronged them. One of the major questions of Animal Kingdom’s fifth season was whether the Codys could thrive without Smurf. Despite their many setbacks, the season ended with Pope, Deran, Craig, and J on the same page. With season six already introducing a few new faces to be wary of, and the Codys’ list of enemies is evergrowing, only time will tell who can actually be trusted. With all the drama and skeletons from the Codys’ past that has yet to arise in Animal Kingdom’s final season, it seems the only thing for certain is that “1992” and “Rise” are the mere tip of the iceberg.

MORE: Why A Mass Effect TV Series Could Work