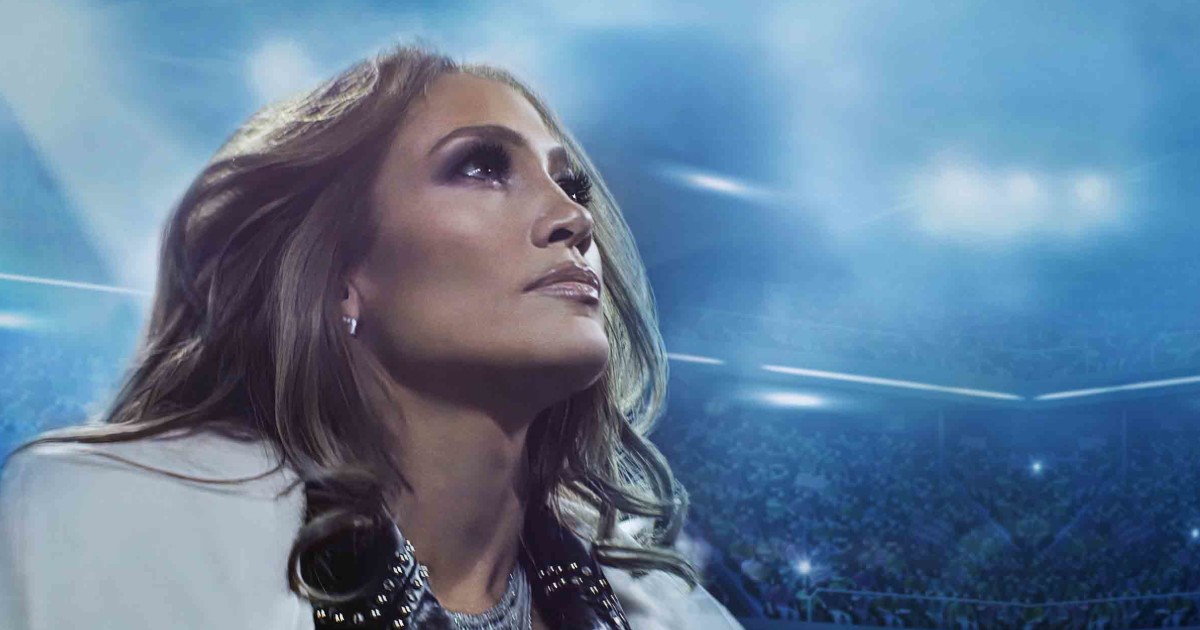 Jennifer Lopez is all about getting loud.

The artist has a lot to say in her new documentary, “Halftime,” which premiered at the Tribeca Film Festival last week and rolled out on Netflix on Tuesday.

The film looks at Lopez’s professional life in recent years, including the making and promoting of the movie “Hustlers” and behind-the-scenes of the Super Bowl Halftime Show she headlined with Shakira. It also offers a window into her personal life, including a brief cameo of fiancé Ben Affleck. (Her ex-fiance Alex Rodriguez is not mentioned or included in the documentary at all. They broke up in April 2021).

Here are five takeaways from the documentary.

Lopez was frustrated about splitting the Super Bowl show

For the 2020 halftime show, Lopez and Shakira each split their time evenly for the 14-minute performance, singing a medley of their major hits.

And while Lopez was honored to perform on a national stage with Shakira, behind the scenes she was also frustrated about the time constraints on the performance.

During one scene, Shakira and Lopez chat about the Super Bowl on the phone: Lopez tells Shakira, “If it was going to be a double headliner, they should have given us 20 minutes. That’s what they should’ve f—— done.”

When prepping the show with her music director, Lopez is also seen getting frustrated over the time constraints. “This was the worst idea in the world to have two people do the Super Bowl,” she says.

At one point ahead of the show, she’s also captured on video talking on the phone with Ricky Kirshner, an NFL producer, saying the finale “can’t just be one minute.”

“We’re trying to squeeze this down to the bare minimum. It’s hard because it’s such a big stage, and it’s such an important show. And all of us have dreamed of doing it. And it’s been a nightmare since we’ve started.”

When Kirshner pushed back, Lopez responds by saying: “I’m trying to give you something of substance… I want something that’s going to make a statement.”

The NFL also “didn’t want the cages in the show,” according to Lopez and others in the documentary.

“To take out the cages and sacrifice what I believe in would be like not being there at all,” Lopez says in the documentary. She says she stood her ground, asserting that “The Super Bowl is tomorrow and we’re not changing anything.”

Ultimately, the show kept the political statement in place. There were child performers in glowing spheres that many interpreted as a reference to the immigrant children and youth being held at U.S. detention centers. Emme, Lopez’s daughter, also joined her mother on stage and sang a few bars of Bruce Springsteen’s “Born in the USA” as Lopez unfurled a feathery flag that featured the American and Puerto Rican flags on it.

Lopez posted on Instagram the day after the Super Bowl. She wrote in the caption, “other people can try to build walls, keep us out or put us in cages. We are proud to recognize that all of us together are what makes this beautiful country truly great.” At the time, the comments about walls and cages seemed to confirm speculation that she was sending a political message with her set.

During the documentary, Lopez notes that she’s not “into politics.”

“I’m not that person,” she says. “But I was living in a United States I didn’t recognize. I was afraid for my kids, for their future.”

It was seeing images and footage of kids in cages at the border that made her feel like she “couldn’t believe” what she was watching. In 2018, hundreds of kids were separated from their parents at the U.S. border as part of the Trump administration’s “zero tolerance” policy.

“You don’t rip a child from their parents,” she says. “There are just certain things as a human being you don’t do.”

“It made me realize that I had a responsibility to not be quiet,” she adds. “To not just leave the politics to everybody else.”

When prepping her Super Bowl act with Shakira, Lopez is seen discussing making a statement with their show and defying the “narrative that Trump created” that “everybody’s an immigrant trying to sneak into the country and is who is a criminal.”

“Some of us have been here for years,” she says. “And a lot of those people are just good people who are looking for the American dream. That’s all they want.”

Lopez considered quitting Hollywood amid scrutiny, jokes at her expense

As her career blew up, Lopez says there was a time when she “had really low self esteem.”

“No matter what I achieved,” she says in the documentary. “Their [the media’s] appetite to cover my personal life overshadowed everything.”

“I believed a lot of what they said, which is that I wasn’t really good,” she says.

The documentary shows clips of late night shows mocking Lopez, particularly her relationship with Affleck. The pair known as “Bennifer” were one of Hollywood’s hottest couples from 2002 to 2004. They called off their wedding days in advance and later broke up.

Each then married other people. Lopez was married to singer Marc Anthony, whom she split with seven years later. Affleck married actor Jennifer Garner, but in 2015 they announced they were divorcing after 10 years of marriage.

The couple reunited last year, but initially kept their romance under wraps. They announced their engagement in April 2022.

Affleck is briefly interviewed for the documentary, where he is asked about the scrutiny Lopez received during the early days of their relationship.

“I said to her once, doesn’t this bother you?” he says in the documentary. “And she said, I’m Latina, I expected this. You just don’t expect it, you expect to be treated fairly.”

“There were many times where I was like I think I’m just going to quit,” she says. “I had to really figure out who I was and believe in that and not believe anything else.”

The documentary also shows a series of clips of people in the industry mocking Lopez’s butt in various segments that appeared on air.

“When I started working, the beauty ideal was very thin, blonde, tall, not a lot of curves,” she says. “It was hard when you think people think you’re a joke. Like you’re a punchline. But I wound up affecting things in a way that I never intended to affect them.”

Throughout the documentary, viewers are given a look at all the work that Lopez put into the movie “Hustlers,” including taking pole dancing lessons.

“It’s super painful because it is like a crash course,” she says in the documentary, pointing to bruises on her legs obtained from learning.

The film, she says, was especially exciting to her because it “had substance.”

“That’s something I fought for in my career,” she says. “This is a film about women who had limited options and had to make hard choices. These characters remind me of women I knew growing up in the Bronx.”

The documentary highlights all the awards season buzz Lopez generated for her role as Ramona, the senior dancer at a New York strip joint, in the film.

In December 2019, Lopez received a Golden Globes nomination for the role. “It only took 20 years,” Lopez jokes in a call reacting to the nomination.

The cameras follow Lopez to the ceremony itself. She didn’t win.

When reflecting on the loss, she says to the camera, “I really thought I had a chance; I felt like I let everybody down.”

At one point in the documentary, she is seen reading positive reviews and getting emotional about the overwhelming supportive reaction.

Amid awards season, she is also seen juggling rehearsals for the Super Bowl and attending events, remaining hopeful for a nomination for the most coveted award in Hollywood.

The morning the 92nd Academy Awards nominations were announced in February 2020, Lopez did not get the nod.

“The truth is I really started to think I was going to get nominated,” she says in the documentary. “I got my hopes up because so many people were telling me I would be. And then it didn’t happen. I had to ask myself, what does that mean? I do this not for an award … I do this to tell stories and to affect change and to connect with people and make them feel things, because I want to feel something. That’s why I do it.”

Lopez strives to ‘be better in every way’

Lopez said it took her a long time to “find” her way in the industry.

She said after her divorce with Marc Anthony, the father of her children, she took a lot of time to reflect on her career.

“As an artist, I kind of lost a little bit of who I was in trying to kind of build a perfect life, a family life,” she said. “And when my kids were 3… I got divorced. I was a single mom with two little kids, at 42…movie roles were not knocking down my door. As I was getting back to work I really felt like I didn’t know what my value was anymore.”

Being a judge on “American Idol” helped her “find her purpose.”

“I really learned a lot about myself,” she said, including that she needs “to be better in every way.”

“You know you have those moments in this business where you’re like, what’s next? And will anything be next?” she says in the documentary. “I think every entertainer, every creative person, every artist, lives with that fear.”

Now, however, Lopez says “I’m going to be unafraid to get loud and use my voice in the best way that I can.”

At this point in her career, Lopez said she’s “thriving” in a way she “never imagined.” The documentary comes to an end by showing footage of Lopez’s performance at President Joe Biden’s Inauguration.

“I’m not done,” she says at one point in the documentary, “not even close.”