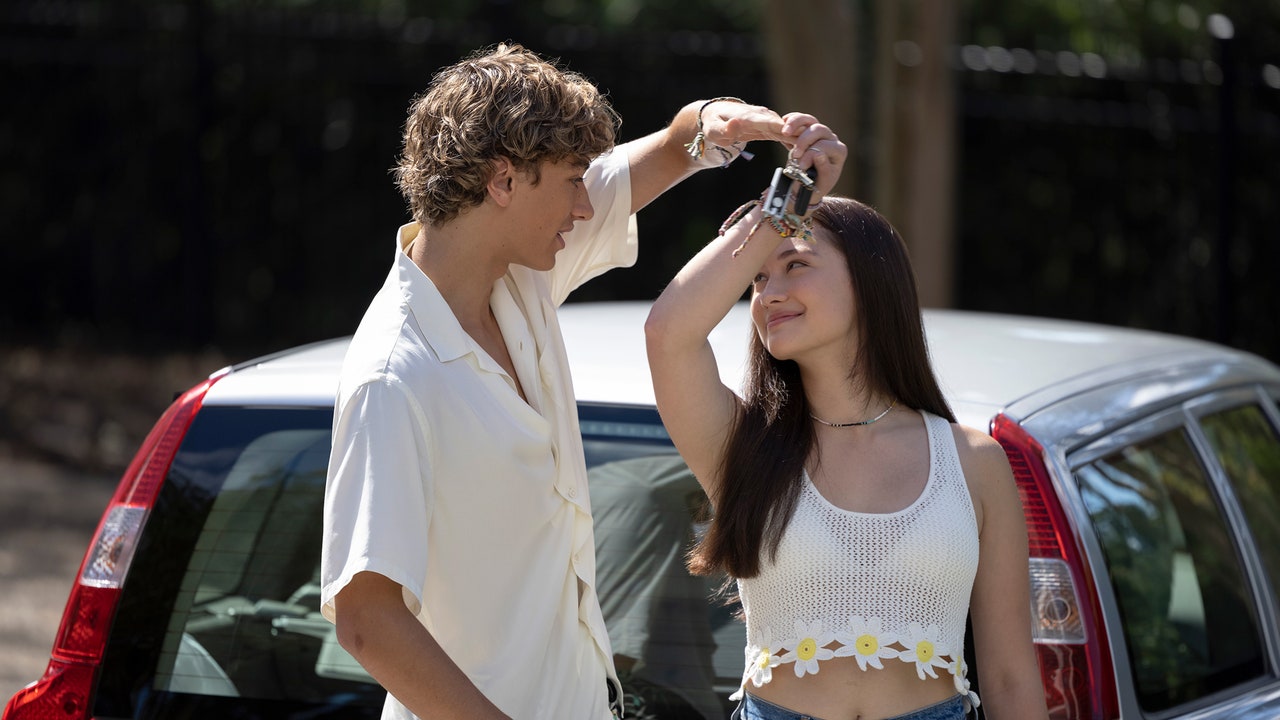 The Summer Fantasy Industrial Complex is predicated on that yawning gap between what we think the months between June and August are supposed to be like—based on pop culture, our cooler friends’ Instagram Stories, cherry-picked childhood memories—and how the season actually unspools in our real, painfully un-soundtracked lives. Prime Video’s new series, The Summer I Turned Pretty, meets this seasonal all-ages tilt toward romanticism with all the satisfying ease of a shimmering open pool.

Enter the inevitable love triangle, but also every teen summer romance trope possible: the late-night swims, the date at the drive-in movie theater, the starched white summer job uniforms, the shopping spree, debutante festivities (a.k.a., excuses to show off the results of said shopping spree), beachside makeouts, open-air Jeeps, plenty of enemies-to-lovers energy, and an abundance of floppy-haired boys who wouldn’t look out of place in a TikTok creator house—all served up alongside the Taylor Swift Spotify Radio playlist. If you loved The Last Song, Han’s To All The Boys I’ve Loved Before, or have the vaguest notion of what “coastal grandmother aesthetic” means, you’ll eat it all up with a spoon.

But if a 15-year-old’s romantic travails don’t do a lot for you, I have great news: Belly is not the person having the most fun in The Summer I Turned Pretty. That’s actually Laurel, her cool yet ruthlessly responsible writer mom. While it’s one thing to project your inner teen’s yearnings onto a flailing high schooler mired with indecision over who’s the floppiest-haired of all (both Christopher Briney and Gavin Casalegno make it a believably tough competition), there’s a slightly more grown-up but nonetheless delightful escapism in Laurel’s setup as a single mom who, apparently, gets to spend the whole summer smoking weed and lightly co-parenting with her rich best friend.

Forget sophomoric text exchanges and just give me the scene in episode 2 where Laurel and Susannah are scoping out the local bookstore (because of course, Susannah is insisting on throwing her a book party—with catering!), and they run into a cute, Franzenesque author in horn-rimmed glasses. Sparks fly; textual analyses of each others’ writing is exchanged; the inevitable skinny dipping date is already in sight. Now that’s romance, people!

The specificity of Laurel’s fantasy summer is ultimately what rescues The Summer I Turned Pretty from being too sticky sweet. Teen dramas have been doling out romantic storylines for the parent characters long before the days when Dan Humphrey started dating his potential step-sister. But most single moms on TV wind up in situations that feel, well, rather sensible—Lorelei Gilmore marries the gruff, grounded Luke; Sex Education’s Dr. Milburn falls for Jakob, the Swedish handyman. Nalini in Never Have I Ever gets to date a hot dermatologist for a little while in Season 2, but she basically calls it off because that relationship feels too self-indulgent. Lily van der Woodsen, after marrying at least one billionaire, makes it work with, well, Rufus Humphrey. I’m not saying the Jakobs and Lukes of the world aren’t already many, many people’s definitions of Fantasy Man, but if we require even TV moms to ground their romantic lives in a degree of practicality, then when, exactly, do we get to see women revel in some maximal wish fulfillment, post-coming-of-age?

As we eventually find out over the course of the series, there’s actually a tragic reason for why this summer in Cousins feels so pivotal for both Laurel and Susannah’s families—and why each character is so deeply invested, consciously or not, in projecting a protective aura over the season. If heartache, both of the teenage and the existential variety, is a fact of life, doesn’t that make some good, frothy fantasy all the more essential?

There’s an early scene at the country club (of course there’s a country club) that I kept returning to over both Laurel and Belly’s ups and downs, where Belly is all dressed up and flirting with one of her many teen beaus (the one who works on a whale-watching boat, of course). “You know, I think it’s too late,” she warns him as a totally silly, completely delicious pink fascinator wobbles on her head. Then she adds, “I might be wistful forever.” Ah. One can only hope.