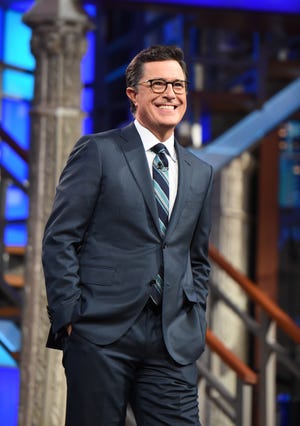 A production team for “The Late Show With Stephen Colbert” was detained by police and charged with unlawful entry while filming at the United States Capitol Thursday.

United States Capitol Police officers responded to a call for a disturbance in the Longworth House Office Building Thursday night, where they found seven people “unescorted and without Congressional ID,” the USCP shared in a statement.

“The building was closed to visitors, and these individuals were determined to be a part of a group that had been directed by the USCP to leave the building earlier in the day,” the statement continued. “This is an active criminal investigation, and may result in additional criminal charges after consultation with the U.S. Attorney.”

According to a statement from CBS, the employees were detained after filming interviews at the Capitol with Triumph the Insult Comic Dog, who is voiced and operated by comedian Robert Smigel.

The interviews, which were filmed Wednesday and Thursday, “were authorized and pre-arranged through Congressional aides,” CBS said.

After the interviews, the production team stayed at the Capitol to capture additional stand-up and comedy material in the halls when Capitol Police detained them, CBS said.

Earlier Thursday, the official Twitter account for Triumph the Insult Comic Dog shared images from filming inside the Capitol, including a shot of Greg Jacob, an attorney for Mike Pence, testifying at a House hearing investigating the Capitol riot that occurred on January 6, 2021.

Congress is currently in the midst of holding hearings regarding the riot, questioning a series of witnesses including a U.S. Capitol Police officer, a former U.S. attorney and a former Fox News political editor. They testified about the actions of the rioters and what happened in the Trump White House in the days following the 2020 presidential election.

In its third round of public hearings Thursday, the special congressional committee put a spotlight on the intense pressure former Vice President Pence received from Donald Trump to overturn the 2020 election results.

‘Come and get me’: Stephen Colbert fires back at Proud Boy who name-dropped him in court