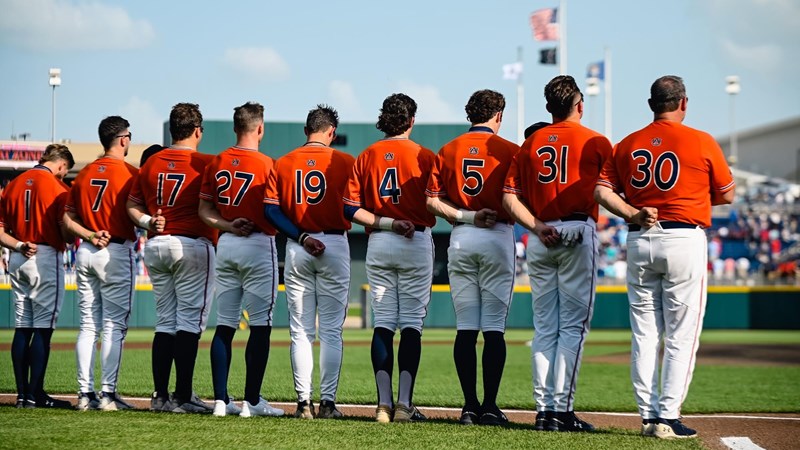 Ole Miss starting pitcher Dylan DeLucia (7-2) struck out 10 Tigers without a walk and allowed only one run on four hits in 7.2 innings. Rebels reliever Josh Mallitz struck out the side in the ninth.

“We never could garner any offense,” Auburn coach Butch Thompson said. “Dylan just set a slider beneath us and a fastball above us. He didn’t trick us too much. We could not evaluate the strike zone with him on the mound. It shortens the game for their bullpen, who did a nice job and got to the finish line.”

Trailing 5-0, Auburn got on the board with three straight hits to start the seventh. Garrett Farquhar led off with a double, advanced to third on Sonny DiChiara’s single and scored on Bobby Peirce’s single, trimming the Rebels’ lead to 5-1.

DeLucia dashed Auburn’s hopes for a big inning by retiring the next three batters.

Auburn starter Joseph Gonzalez retired the first two batters in the top of the first before three straight Ole Miss hits gave the Rebels a 2-0 lead when Kemp Alderman singled to left to score Tim Elko and Kevin Graham.

“Their approaches created some fortune for them,” Thompson said.

Graham doubled in the first and homered just beyond the reach of leaping left fielder Mike Bello in the third to put the Rebels ahead 3-0.

“He (DeLucia) was putting it where he wanted to today,” Peirce said.

Gonzalez struck out seven in five innings, one shy of his career high, before Carson Skipper relieved him with two on in the sixth. The Rebels added two more runs in the inning, scoring on a bases-loaded double play and a two-out single.

“I kept Carson in the game to see if we could get back and catch them later,” Thompson said.

“Today wasn’t really a true testimony to who we are,” Skipper said. “Monday’s going to be a different story. It’s how you respond and bounce back that defines who you are.”

“We’ve battled back a lot. One loss isn’t going to kill us,” Peirce said. “We’re going to come back Monday fighting. We’re a team that’s going to fight every game no matter what. We believe in ourselves. We believe that we’re going to win, even with one loss.”