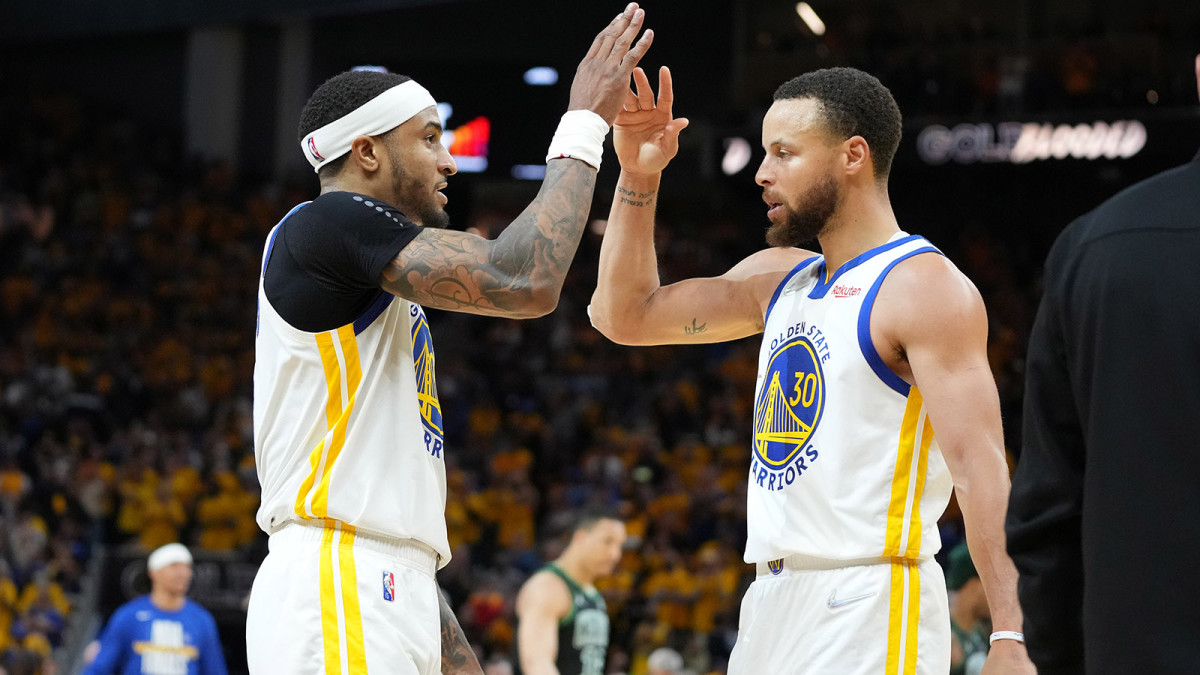 SAN FRANCISCO— A salary-dumped draft bust, a basketball vagabond, a G League alumnus and a new-age philosopher orchestrated the biggest win of the NBA Finals on Monday, while the greatest three-point shooter in history missed all of his three-point shots.

Sometimes basketball is thoroughly irrational—wonderfully, joyfully irrational. Even for the NBA’s sole reigning dynasty. Perhaps especially for that dynasty. And the Golden State Warriors were indeed feeling rather joyful after scrapping out a 104-94 win over the Boston Celtics, staking them to a 3-2 lead in the series—one victory away from another championship.

“I’m not going to lie to you,” said Klay Thompson, “it does feel good.”

In a series that has been relentlessly strange and unpredictable, this Warriors victory was possibly the strangest chapter yet.

Stephen Curry couldn’t connect from 24 feet—or 26 feet or 30 feet or any of the other impossibly deep regions where he usually thrives—missing all nine of his attempts beyond the arc, and ending a 132-game playoff streak with at least one three-pointer. He scored just 16 points.

That should have spelled trouble for the Warriors, who in the absence of a consistent second option have leaned harder than ever on their superstar guard this spring. And yet, suddenly, the scoring sprang from everywhere…

From Andrew Wiggins, the former No. 1 overall pick who was deemed a bust in Minnesota and jettisoned by the Timberwolves two years ago. He attacked relentlessly, dunked emphatically and finished with 26 points and 13 rebounds.

From Gary Payton II, an undrafted, four-times-waived defensive specialist, who produced 15 points off the bench.

From Jordan Poole, who was still logging time in the G League last year, and who has been alternately electric and erratic all postseason. He had 14 points in 14 minutes in Game 5—including his second third-quarter-buzzer-beating three-pointer of the Finals.

And finally, from Thompson, Curry’s longtime Splash Brother, who made the nickname literal over the weekend, plunging into the chilly San Francisco Bay for a rejuvenating swim, then posting about it on Instagram with the caption, “The ocean heals the mind, body & soul.”

If Thompson is feeling unusually philosophical now, it’s wholly understandable, given the journey he’s taken since the Warriors were last on this stage. Monday marked the three-year anniversary of Thompson tearing his ACL in the 2019 Finals (an injury that was followed a year later by a ruptured Achilles). He commemorated the anniversary by hitting a team-high five three-pointers, finishing with 21 points.

And then waxed poetic about his time in the sea.

“When it’s one of those days in the low 60s and the sun is shining, I make it a point to jump in the ocean,” Thompson said. “I just think the ocean has healing properties that a pool might not have, or a cold tub. And just to be immersed in nature like that, it really makes me happy. And just your whole body feels so great when you get out of that cold water. … I’m an Aquarius, so I just have always loved the water my whole life. It really is my happy place, besides the hardwood.”

Thompson smiled, and a few reporters chuckled as he rhapsodized. But really, who could argue the point? Who would doubt anything the Warriors say, do or attempt now, as stand on the verge of a possible fourth title in eight years? Every bet they’ve made, every hunch and every leap of faith is about to pay off. They have two chances to close the series: in Boston on Thursday or, if necessary, back home on Sunday.

“I don’t think I’ve ever been happier after an 0-for-whatever type of night,” Curry said, “just knowing the context of the game… and the fact that you had four guys step up in meaningful ways to help us win.”

This title, if they get it, would be the most unexpected of them all, built on one singular star and a cast of afterthoughts and reclamation projects, most of them acquired in the last two years and now playing in their first Finals. And yet they all seemed perfectly at ease and in synch Monday night.

“It’s something I’ve dreamt about for sure,” Wiggins said of his one shining moment in the Finals—a possibility that seemed distant during five mostly hopeless years in Minneapolis. “There’s just a lot of great people here, great people that challenge you. They hold you accountable. Everyone on this team, this organization, they support you and they want to see you do good.”

Payton’s season was in doubt six weeks ago, after a hard foul in the second round fractured his left elbow. His defense and athleticism have been indispensable in this series against Celtics stars Jaylen Brown and Jayson Tatum. Poole seems to drift in and out of rhythm, but he keeps finding the right moments to deliver.

The Warriors had given up a 16-point lead on Monday and fallen behind by five points late in the third quarter. The ever-serene Thompson drilled a pair of deep threes. Poole hit another. Payton raced for a fast-break layup. And then, with the quarter down to its final seconds, and the Warriors racing upcourt in transition, Wiggins swung the ball to Poole, who calmly drilled a 38-foot bank shot at the buzzer for a 75-74 lead.

It electrified the building and powered the Warriors through the opening minutes of the fourth, as they built their lead back to double digits, capped by another Thompson three and a 19-footer from Poole.

“Everybody’s doing their part,” said Draymond Green, who put up 8 points, 8 rebounds and 6 assists before fouling out with 3 minutes to play. “We found offense elsewhere.”

Meaning, other than from Curry, who through four games had averaged a series-high 34.3 points, punctuated by a virtuoso 43-point performance in the Warriors’ Game 4 win last Friday. The Warriors had to do things differently for a night, and Green seemed gleeful about all of it—the scoring surge from so many overlooked and underestimated figures, and the promise of a Curry resurgence.