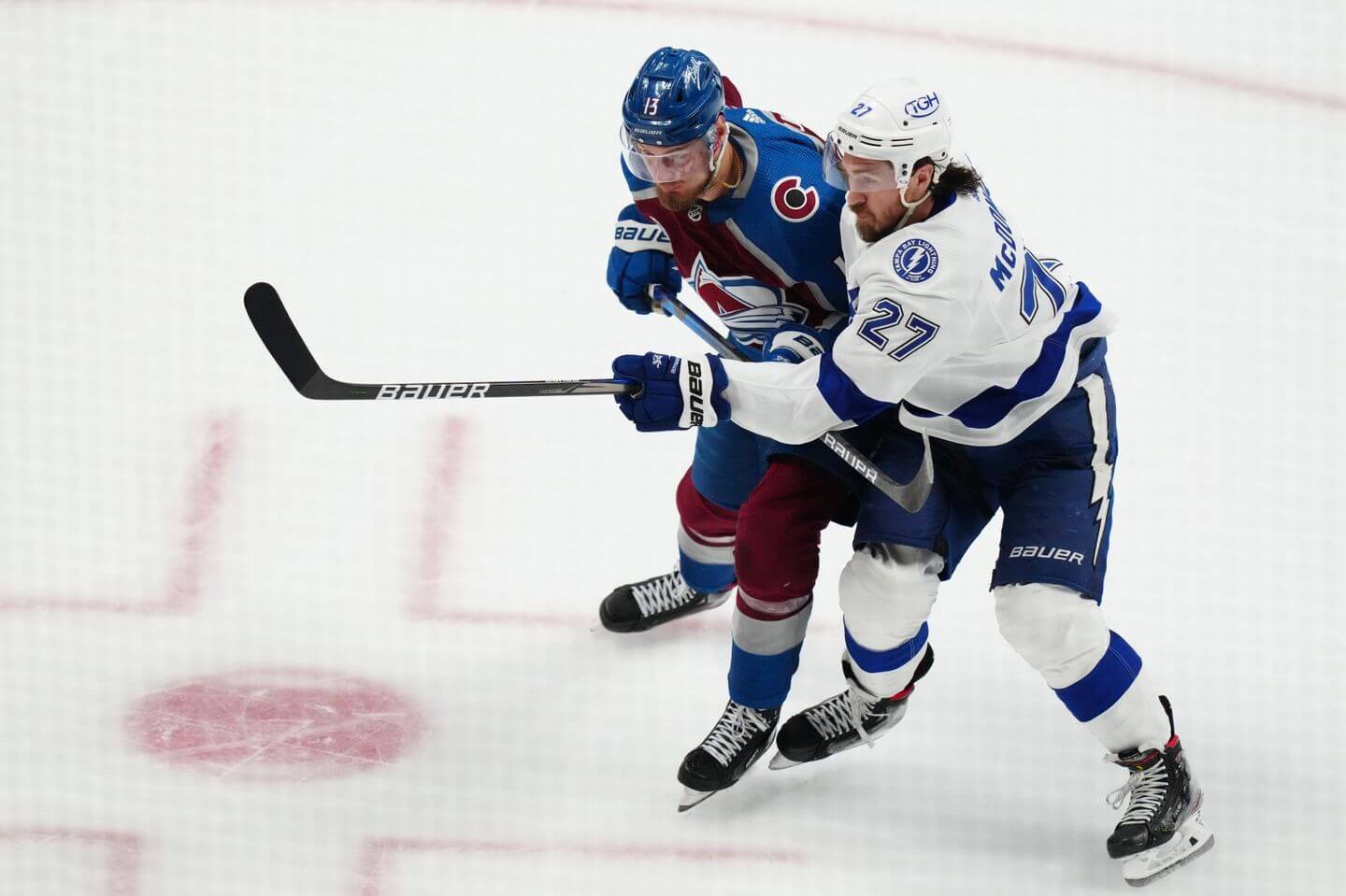 Less than two hours before puck drop Saturday, Tampa Bay coach Jon Cooper made his expectations clear. There wouldn’t be a repeat of the first 10 minutes of Game 1, which saw Colorado score twice before the first period was half over.

“I expect us to be way the heck better,” Cooper said.

One team was way the heck better than it was in Game 1, and not just in the first 10 minutes of the game. It just wasn’t the Lightning.

“It was certainly as close to perfect of a game as you can get from your players,” Colorado coach Jared Bednar said.

Avalanche reach another level in rout of Lightning: ‘Close to perfect’

Stamkos: ‘Let’s see what we’re made of’

Steven Stamkos knows what many are thinking.

The Lightning are in trouble after a humbling and embarrassing 7-0 loss to the Avalanche in Game 2 of the Stanley Cup Final on Saturday night. Colorado has outclassed the two-time defending champs in the first two games, looking faster, hungrier, more disciplined and dangerous.

But as Stamkos addressed the media in the bowels of Ball Arena, it felt like he wanted to deliver a message, if not to the hockey world, then definitely to the players in the Tampa Bay room.

Steven Stamkos and Lightning won’t go quietly: ‘Let’s see what we’re made of’

Jon Cooper on why he didn’t pull Vasilevskiy

Jon Cooper said he didn’t think about pulling Vasilevskiy. “Even if I did, I don’t think he would have come out. That’s the competitor he is… He’s the best goalie in the world. He’s our guy.”

Only the Penguins’ Cup clincher (8-0) over North Stars in 1991 marks a bigger Stanley Cup Final shutout deficit than what Avalanche did to Lightning in Game 2.

That Penguins team had six Hall of Famers, with Jaromir Jagr yet to come

The Colorado goal machine marches on with a 7-0 win in Game 2.https://t.co/afTMqZ7eCj pic.twitter.com/rzzD53gz3b

The Colorado Avalanche take a 2-0 series lead in the Stanley Cup Final, winning Game 2 7-0 over the Tampa Bay Lightning on Saturday. With the series shifting to Tampa, the Avalanche have outscored the Lightning 11-3.

Valeri Nichushkin opened the scoring 2:54 into the game. He added another goal in the second period. Nichushkin has eight goals and five assists through 16 playoff games.

FINAL: The Avalanche trounce the Lightning, winning 7-0. Tampa had fewer than 20 shots. Colorado dominated every area of play and is two wins from hoisting the Stanley Cup.

That’s a shocker of a game. Wow.

The Avalanche are two minutes away from a 2-0 advantage, but I’m just going to state the obvious here and remind everyone that the Lightning have been here before. They overcame a 2-0 deficit in the Eastern Conference Final and won four straight to eliminate the Rangers. Granted, what we just saw was unequivocally the Lightning’s worst performance to date in these playoffs – but if anyone could somehow come back from that, it’s them.

The party in Denver extends way beyond the rink

My friend just sent me this pic. She is at Coors Field and they’re showing updates of the Avalanche-Lightning game in between innings. She said the stadium, obviously, goes nuts each time… and, well, based on the score, we know that’s a lot of nuts. pic.twitter.com/MXkpQV3xA2

Every coach in NHL should take note of Colorado’s power-play. Yes, group has talent that overwhelms, but the structure and puck movement is sublime. More than merely great players doing their thing. That’s a masterfully coached PP1. #StanleyCup @TheAthleticNHL

Cale Makar scores again, this time on the power play after taking a cross heck from Palat. The score is 7-0 Avs.

Cale Makar. Again. This time on the power play after taking a cross heck from Palat. The score is 7-0.

-Josh Manson: goal in the past three series, including OT winner against STL
-Andrew Cogliano: 2 GWG, plus an assist tonight
-Artturi Lehkonen: 7 goals, including the OT winner to send the Avs to the Cup
-Nico Sturm: Assist on OT goal

The Lightning have not managed a shot *attempt* with Nathan MacKinnon, Gabriel Landeskog and Valeri Nichushkin on the ice together tonight (7:28 TOI). Via @NatStatTrick.

Cale Makar has his first point of the series

If Cale Makar is going to get involved, this series might be over already. Good gravy, what a performance by the Avalanche.

The Lightning body language will be notable over these final 17 minutes. That is a fiercely proud group, but champions also know when they don’t have what it takes.

And it looks as though Lightning doesn’t have what it will take against these Avalanche.

So, is it too early to begin wondering where the Avalanche run would rate among modern single-postseason efforts?

Cale Makar has his first point of the series. It’s a shorthanded goal after a Mikko Rantanen trip.

The Avalanche exploit a built-in advantage

Cannot imagine, coming off three tough series in the East, what seeing this type of relentless speed while playing in high altitude is like for the Lightning.

That’s not offering an excuse for the Lightning.

But facts are facts, and the Avalanche exploit a built-in advantage — that famous mile-high thin air — with a roster that attacks with speed and skill in waves. And with a defense corps adept at moving the puck quickly and accurately, the Avalanche forwards have possession so much. It’s tough to envision Lightning winning a game in Denver unless the goalie stands on his head. And he’s doing that despite giving up nine goals in six periods

After five periods, Tampa is being outshot 61-35 and outscored 9-3

We are five periods and a short over time into this Stanley Cup Final and the Lightning have registered only 35 total shots on Colorado’s Darcy Kuemper. For context, the Avs had 38 shots on goal in Game 1, alone.