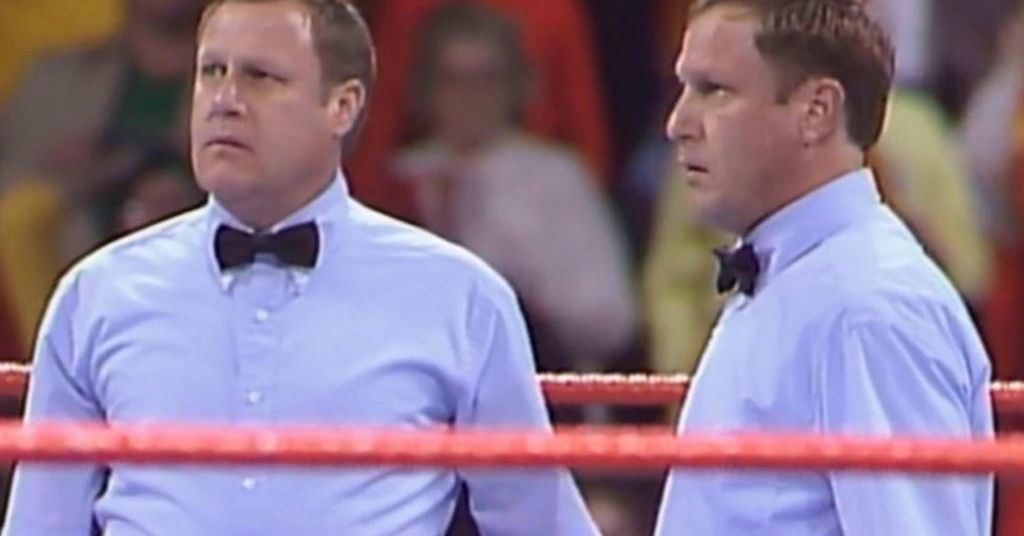 The twin brother of fellow referee Earl Hebner, Dave began working around their hometown of Richmond, Virginia in the 1970s before joining the then-WWF in the 1980s. He worked big matches during the company’s Rock ‘n’ Wrestling era, including Ricky Steamboat & Randy Savage’s show-stealing affair at WrestleMania III. Both Hebners got a piece of the spotlight with 1988’s “evil twin” ref angle, which included Earl being paid off by Ted DiBiase to replace Dave and ensure Andre the Giant won the WWF Championship from Hulk Hogan on an edition of The Main Event.

After having knee replacement surgery, Dave stopped working in the ring and became a road agent. He continued in that role with WWE until 2005 when he was released, then did some work with TNA and on the indies.

Dave Hebner was 73. In recent years he suffered from a variety of ailments, including dementia & Parkinson’s disease. He was part of last decade’s ultimately dismissed class action lawsuit that brought against WWE over CTE and other neurological issues.

Several wrestlers who worked with Dave over the years remembered him on Twitter yesterday (June 17) after the news of his death came out.

I’m sad to learn of Dave Hebner’s passing. He & his brother Earl are two of the nicest people I’ve ever crossed paths with in Pro Wrestling. #RIPDaveHebner

RIP Dave Hebner. Godspeed my friend. All my strength and love to his family, especially my friends Earl and Brian.

My thoughts and prayers are with all of the Hebner family right now. I’m so saddened to hear of the passing of Dave Hebner. Sending you both @TheEarlHebner & @babyhebner every bit of my love. Our condolences to your family, friends & all his loved ones. Im so sorry. ♥️

RIP Dave Hebner. I never worked with Dave but bumped into him countless times over the years. The Hebner family are great friends to our family. Strength & Love to @TheEarlHebner & @babyhebner

I am so saddened to hear about Dave Hebner’s passing. I adore this whole family so much. I’ve been so fortunate to be able to work with Dave, Earl, Brian and Katie and I’m thinking of them all today at this sad time. Let’s celebrate Dave’s life. Love to the Hebners ❤️

RIP Dave Hebner, you were always kind to me. All my best to the Hebner family. ❤️

Sad news about Dave Hebner been friends since 1970 when he and baby Earl were setting up the ring. Had much respect for the Hebner’s. They were part of the company biggest angle both are deserving to @WWE HOF. RipHeb

On behalf of the entire Cageside Seats community, our thoughts are with his family, friends, and everyone missing Dave Hebner today.