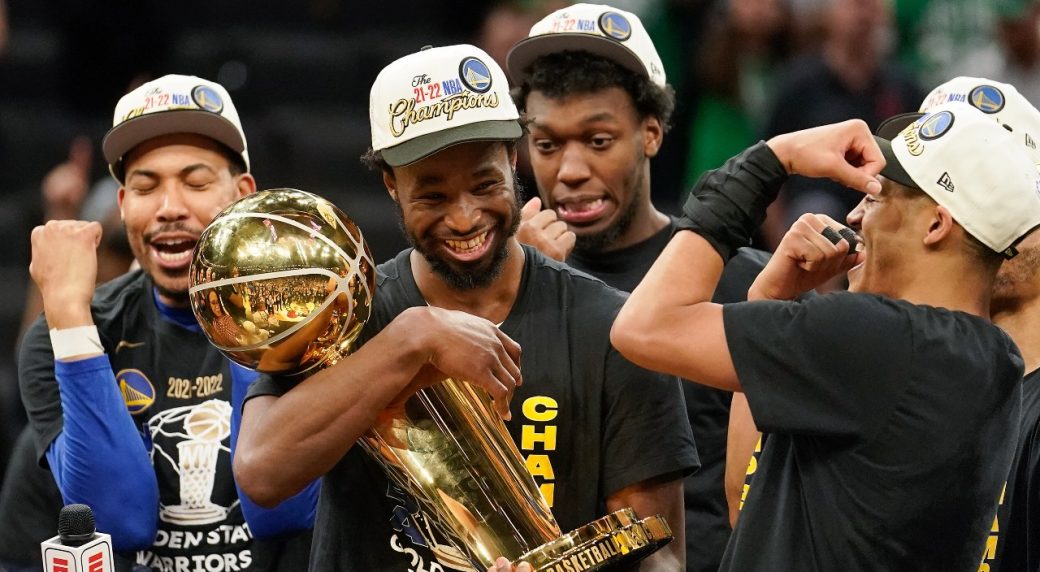 The first eight years of Andrew Wiggins’ NBA career came and went without a chance to prove himself on the league’s biggest stage.

Languishing in Minnesota before joining a retooling Golden State Warriors squad, the lack of big-time opportunities saddled the Canadian with a reputation as a talented player who shied away from the spotlight.

In these NBA playoffs, Wiggins has turned that reputation on its head. Turns out, he likes the big moments just fine.

The Warriors put the finishing touches on their fourth NBA title in eight seasons with an 103-90 win over Boston on Thursday night.

On a team that boasts the likes of Steph Curry, Klay Thompson and Draymond Green _ who have been to six NBA Finals together — it was Wiggins who stepped up with the best stretch of his career to push the Warriors to the title.

The native of Vaughan, Ont., was instrumental in the clinching game, scoring 18 points, with six rebounds, five assists, four steals and three blocks.

“He’s shining on the brightest of stages in the playoffs,” Curry said after Game 5. “It’s just amazing to see things working out in his favour in terms of kind of dispeling all the narratives around him and who he is as a basketball player right in front of your eyes.”

Before Game 6, Wiggins played himself into the Finals MVP conversation with massive performances that helped Golden State turn a 2-1 series deficit into a 3-2 lead.

Wiggins had 17 points and 16 rebounds in Game 4 as the Warriors tied the series 2-2, then put up 26 points and 13 rebounds in Golden State’s 104-94 win in Game 5, punctuating his night by blowing past Boston’s Derrick White for emphatic dunk late in the game.

He also played excellent defence on Celtics star Jayson Tatum throughout the series.

Count his superstar teammates among those he impressed.

“We don’t get more excited then Wiggs dunks on somebody and ‘mean mugs’ them,” Thompson said after Game 5. “That really uplifts the whole team and the Bay Area.”

This type of NBA success was predicted for Wiggins, a much-hyped prospect out of the Toronto area, early in his career. But it took a long time for his prodigious talents to take hold in the big leagues.

After one varsity season at Kansas, Wiggins was selected first overall by Cleveland in 2014, but he would never share the court with LeBron James’s Cavaliers. He was dealt to Minnesota before the start of his rookie season in a package that sent big man Kevin Love to Ohio.

The Cavs would go on to appear in four straight NBA Finals, winning one, all against Wiggins’ future teammates on the Warriors. But Wiggins toiled in relative obscurity on a mostly forgettable Timberwolves team for the next six seasons.

Minnesota made the playoffs once in his time there when they finished 47-35 in 2017-18 _ good for eighth in the Eastern Conference — before bowing out to Houston in five games in the first round.

Every other season was a losing one, including a league-worst 16-66 in 2014-15, when the lone bright spot was Wiggins taking the rookie of the year award.

With the losing came a lack of urgency. With little to play for Wiggins garnered a reputation _ deserved or not _ as a talented player who made little impact on the court, an “empty calories” scorer who put up big numbers when the game wasn’t on the line.

Wiggins was traded to Golden State during the pandemic-shortened 2019-20 season with D’Angelo Russell going the other way. With Thompson out with a torn ACL suffered in Game 6 of the 2019 Finals against Toronto, and superstar Kevin Durant no longer with the team, the Warriors slumped to a 15-50 record.

Wiggins took a while to fit in with his new team, but turned a corner this season, getting an All-Star nod for the first time in his career.

Now, he’s a pivotal part of a championship-winning team.

“It’s the moment,” Wiggins said earlier in the playoffs. “It’s always great being able to showcase what you can do, what you worked for. So I’m just happy to be able to be here on the biggest stage and help my team win.”