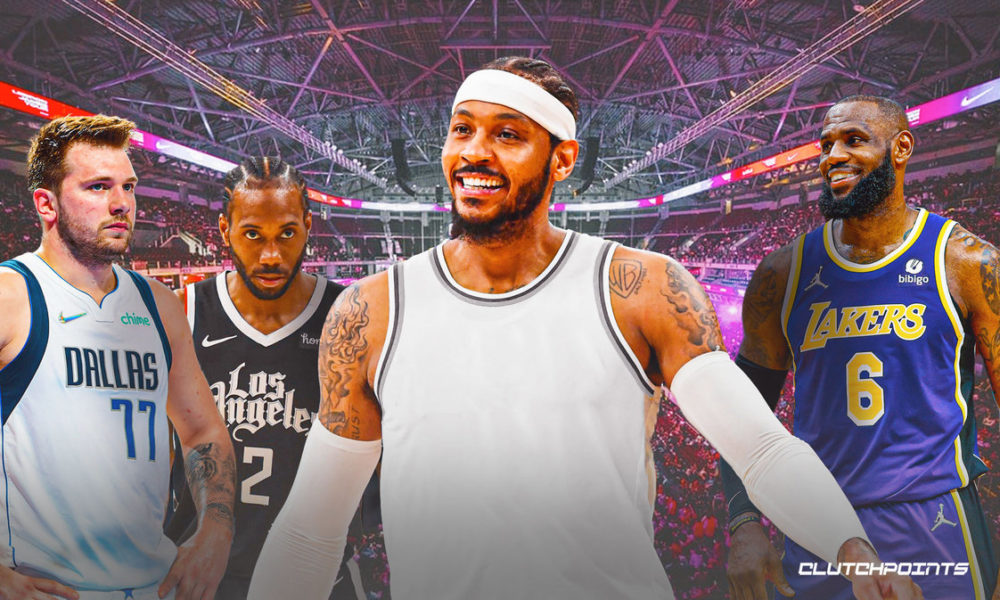 Coming off a highly productive year with the Los Angeles Lakers, Carmelo Anthony continued to re-invent himself in a bench role. He averaged 13.3 points and 4.2 rebounds per game while shooting 44.1% from the field and 37.5% from beyond the arc. He may not be the superstar talent he once was but in the right situation, Melo can still have a major impact. The 10-time All-Star could be pursued heavily during 2022 NBA free agency.

As one of the best pure scorers the game’s ever seen, Anthony will more than likely have a fair share of suitors during the 2022 NBA offseason. This is especially true considering he was one of the few bright spots for the Lakers during their disastrous 2021-22 campaign. Without further ado, let’s discuss the four best landing spots for Anthony in NBA free agency.

Given how well he did in a reserve role with the Lakers this past season, it would only make sense for Anthony to return to the LakeShow for another run. He has accepted his role coming off the bench while providing a much-needed scoring punch to their second unit.

Melo is unstoppable when he gets to his spots! 🔥pic.twitter.com/aBl2UTu1ux

Having hit several big shots throughout the year and coming through for this team when they needed it most, Melo brought a perfect blend of scoring, rebounding, and veteran leadership to Los Angeles. If the Lakers want to return to NBA supremacy next year, then bringing back Anthony would be in their best interest. But if Anthony wants to win a ring, there are better options out there.

Adding an all-time great like Anthony to the Dallas Mavericks would be another quality addition for this up-and-coming title contender. Having Anthony come off the bench and bring some additional scoring to this dynamic Mavs squad would make them even more lethal. For Melo, joining a team with an exciting future seems more enjoyable than staying with the Lakers.

Plus, the Mavericks could even have him close out games and give Luka Doncic another weapon to work with in crunch time. This move would also reunite Anthony with Jason Kidd, who was once his teammate on the New York Knicks. Anthony gave a ton of credit to Kidd, who helped him win the scoring title back in 2013, after he had to play without him the following season. With the Mavs, Anthony would be another strong voice in the locker room.

After a disappointing end to their season, the Milwaukee Bucks are looking to retool and bounce back in 2023 with their sights set on a championship. Bringing in a seasoned vet like Anthony would give them a deeper rotation to work with. His scoring and rebounding abilities would be huge assets to them, just as they were for the Lakers.

As they await the return of Khris Middleton, signing a multi-faceted scorer like Melo in free agency would give the Bucks an additional boost in their continued journey to rack up as many NBA titles as possible during Giannis Antetokounmpo’s prime.

Looking to make their way back to the NBA postseason in 2023, the LA Clippers could be another ideal landing spot for Anthony. His shooting touch and active hands would give the Clippers another proven playoff performer on the roster. It would also pair Anthony back with former Oklahoma City Thunder teammate Paul George and one-up the Lakers.

At this point in his playing career, Anthony has accepted his place as a role player who can still produce in the clutch. With LA seeking to win its first championship in team history, Anthony could be a game-changing acquisition for them during the 2022 NBA offseason. Not to mention that Kawhi Leonard has urged the front office to make a play for him, so this move may become a reality sooner than we realize.