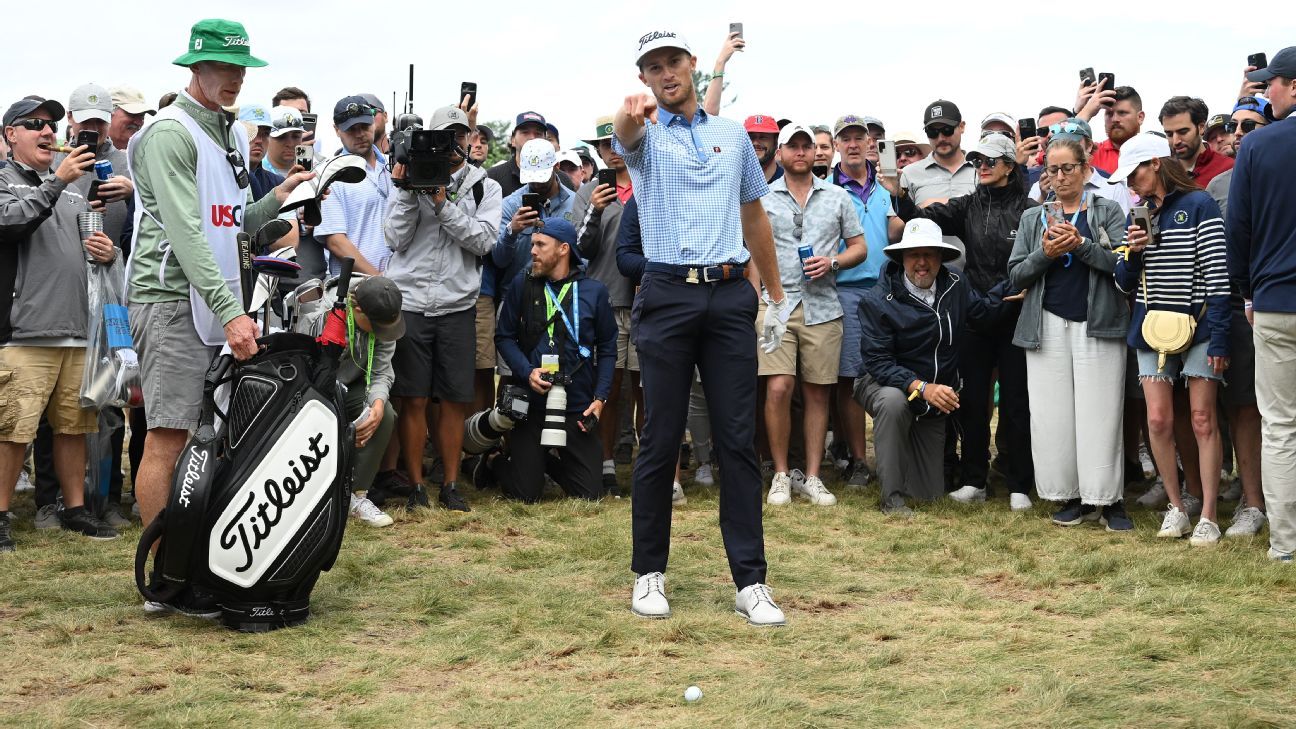 BROOKLINE, Mass. — The slice off the 18th tee did not matter. Neither did the fact that an approach shot by Will Zalatoris landed in the bunker protecting the 18th green. By the time his caddie Ryan Goble pierced the cold Boston air with a fist pump and Zalatoris picked the ball from the cup for a crucial par that gave him a Saturday-best 67, Zalatoris had a share of the U.S. Open lead heading into the final round.

Zalatoris’ name has become associated with Sundays at major tournaments in recent years. The 25-year-old has yet to win one (or a PGA Tour event for that matter), but his performance in the game’s biggest tournaments has been stellar. He finished sixth in the 2020 U.S. Open and since then has had four other top 10 finishes at majors, including a second-place finish at the Masters in 2021, and a second-place finish at the PGA Championship earlier this year. In eight major starts, he has five top 10 finishes.

The coveted victory, however, keeps evading him.

At last month’s PGA Championship at Southern Hills Country Club in Tulsa, Oklahoma, Zalatoris had his best shot to win a major yet. The No. 14-ranked player in the world found himself in a playoff against Justin Thomas for the championship, but lost it over three holes. Within the defeat, Zalatoris found something: belief. Being that close this time boosted his confidence and made him feel like he could be, as he put it, “one of the world-class players and one of the best in the world.”

“I think, if anything, on top of the belief that I belong in these situations, I think it’s also the belief that when I’m off, I’m not that far off,” Zalatoris said Saturday.

A little bit like Woods, Zalatoris’ game seems to rise to the challenge as conditions and courses get tough. And this week, he has set himself up well to hang tough on a course he calls the toughest he’s ever played. The Wake Forest alum played The Country Club during the same 2013 U.S. Amateur that his Sunday partner Matt Fitzpatrick won and, though the routing and some of the holes have changed, the course’s teeth are still as sharp as Zalatoris remembers.

“This place is a beast,” Zalatoris said, adding that the conditions Saturday — cold and windy — made it even tougher.

The San Francisco native added, “This is a pretty South San Francisco day, for sure. Hitting 8-irons from 145 yards when for me I hit them about 175. Just the heavy air, putting on poa annua. That’s how I learned the game, and that’s how it really started for me.”

Sunday won’t be much different. Temperatures are set to be below 60 degrees, and the wind won’t be slowing down much. It’s in these kind of conditions that Zalatoris’ ball-striking gives him an advantage on the rest of the field. But to hear Zalatoris tell it, patience is what will be even more important.

A lot of people are backing up today, but not @WillZalatoris. 🐦

“You can’t play defensive on this golf course,” Zalatoris, who has laid up every day on the driveable par-4 fifth hole, said. “You almost have to play aggressively defensive. You’ve got to be hitting a lot of shots towards the middle of the greens. There’s still no cakewalk.”

In the past, Zalatoris has struggled with his putter. Yet lately he’s found a stroke that, even if not aesthetically pleasing, seems to work for him. And given that the conditions this weekend are making it hard to go right at pins, Zalatoris’ strategy of leaving himself putts he can lag to shorter distances is working well.

“I think speed has always been the best part of my putting, and I keep giving myself as many 25- to 35-footers that I can out here,” Zalatoris said.

“And I think it just makes the round a little bit more stress-free. By no means is it stress-free. I should say less stressful. Just keep getting the ball just around the hole.”

Access 4,300-plus hours of live coverage from 35 PGA Tour tournaments each year, including four days of coverage at 28 events with four feeds each day. Plus, access replays, originals and more. Stream on ESPN+

It sounds simple, but Zalatoris has gotten to the point of his career where simplification is the way to improvement. The margins, at this level, are so slim that any one tweak, swing or decision can change the course of a player’s round, tournament, career.

Rarely, in any sport, does winning happen right away. Even in golf, where players like Rory McIlroy and Jordan Spieth have won at a young age, it has only served to warp expectations of them heading forward. Success and development are almost never linear, but failure can sometimes be just that.

Zalatoris has failed to win multiple times, but he keeps getting closer and closer, which gives him no other choice but to believe that, sooner or later, failure will give way to success. On Sunday, he gets another 18 holes to try and finally give himself more than just a learning experience.

“I’ve put myself in this situation a few times in my career,” Zalatoris said. “Obviously have to go out and get it tomorrow.”

On Saturday, that same ball Zalatoris held on to following his clutch par found the hands of a young fan off the 18th green. The boy smiled as Zalatoris walked by and tossed it to him on his way to making his score official. Should he hold on and finally win his first major Sunday, you can bet Zalatoris will be keeping that ball for himself.