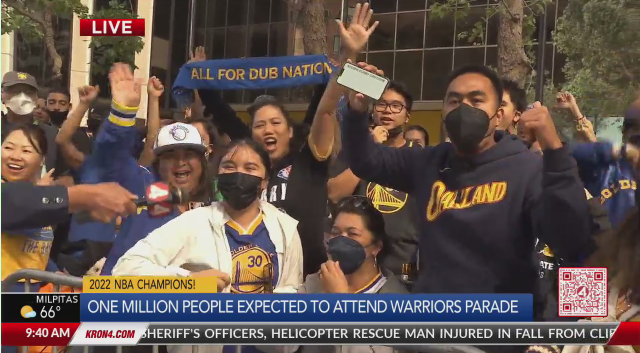 This story will be updated with real-time updates throughout the day.

“That trophy is nice,” Curry said. “We grown up in front of y’all’s eyes, from 2015 when we wondered what face shaving cream was because we didn’t have the ability to grow this stuff. … This is what it’s all about: entertaining you guys, giving you something to cheer for and be passionate about.”

After Curry’s remarks the team took a photo.

“Real mature, Draymond,” Thompson said. “He has the maturity level of a third grader.”

Thompson said the small things in life inspire him to keep going, “whether it’s taking a picture with an old lady or a young kid, Dub Nation has no bounds.”

11:02 a.m. – Andrew Wiggins and Draymond Green were brought up to speak at the ceremony.

“I’m just trying to think of the most controversial thing I can say,” Green said. “What do you want me to tell you? That we’re better than everybody? What do you want from me?”

“You talk about which championship means more? The reality is every single one of them is a journey,” he said. “What you appreciate about the journey are the people you go with.”

Wiggins didn’t have anything to add

“With Steph it’s the combination of the incredible talent and the humility,” Kerr said. “He just makes everyone in the room want to win with him, for him.”

Kerr said that there’s a “great mix” of veterans and younger players on the team.

“This was truly an organizational success this year from top to bottom,” Kerr said.

“We’re going to give a homecoming like no other,” Breed said. “Go Warriors!”

Breed said Thrive City has meant so much to the city, and said that Coach Steve Kerr and the team do great things both on and off the court.

“I’m going to be smiling and waving so hard my face is going to hurt,” she said. “I want you to show so much love to this team and to all the people on this stage who work so hard.”

10:45 a.m. – Klay Thompson lost his hat in his boat on the way to the parade, a video on his Instagram Live shows.

10:43 a.m. – KRON4’s Camila Barco is at the scene of the parade route as the fans in the crowd get more and more excited awaiting their heroes.

10:42 a.m. – Speaker of the House of Representatives Nancy Pelosi (D), who represents San Francisco in that body, is in town for the hometown parade.

10:34 a.m. – The championship ceremony has begun in front of the Ferry Building on San Francisco’s waterfront. Watch it live on KRON4.

10:32 a.m. – “The Clipper mobile system is experiencing unprecedented demand due to the Warriors parade this morning,” a tweet stated. “If you are experiencing issues adding or reloading a card on your phone, please keep trying until successful as we are seeing purchases going through.”

9:57 a.m. – The clipper app is experiencing issues with payment and purchasing as BART stations see lines for fans trying to get into San Francisco, according to a tweet.

“The Clipper app is experiencing some issues with payment and purchasing. We recommend loading your Clipper card before entering @SFBART or walking away from stations for better cell service,” the tweet states. “We have an internal team currently investigating and apologize for the inconvenience.”

9:30 a.m. – Here’s the line at the Dublin station to buy a clipper card, according to a BART tweet.

8:39 a.m. – KRON4’s Will Tran talks to fans coming in from all over the Bay Area as the parade route fills up.

8:04 a.m. – KRON4’s Jason Dumas shows us where the confetti will be launched from and talks to fans from San Jose who got out here at 5:45 a.m. He also asked fans to name their favorite that isn’t Steph Curry.

7:30 a.m. – KRON4’s Sara Stinson reports from Market and 5th streets. Since some stores are sold out of championship gear, clothes and swag, vendors are selling on the street.

Dub Nation is also pushing back strongly against the mean-spirited accusation from Boston Celtics can that chef Ayesha Curry can’t cook.

6:51 a.m. – KRON4’s Will Tran reports that if you’re getting up now and getting ready to leave for the parade, hopefully you’re quite tall, because front row seats are quickly filling up as Fans are show up by the BART car load.

Many of them showed up before sunrise

Of course planning started on Thursday night when the Warriors won another title. This is the first Warriors parade in San Francisco, as the team used to be in Oakland.

Drivers won’t be able to cross Market Street, since that is the parade route.

6:40 a.m. – Warriors fans are starting to arrive on Market Street, KRON4’s Sara Stinson reports. Stinson had trouble parking even at 4 a.m., so don’t even think about driving downtown today.

6 a.m. – SAN FRANCISCO (KRON) – The Golden State Warriors are making a triumphant return to San Francisco with a parade after winning the NBA Finals in Boston on Thursday.

The parade will begin today at 11:20 a.m. and proceed from the base of Market Street at Main Street to 8th Street.

There will be a Championship Ceremony at 10:20 a.m, and the parade proper will end around 2 p.m. One million spectators are expected.