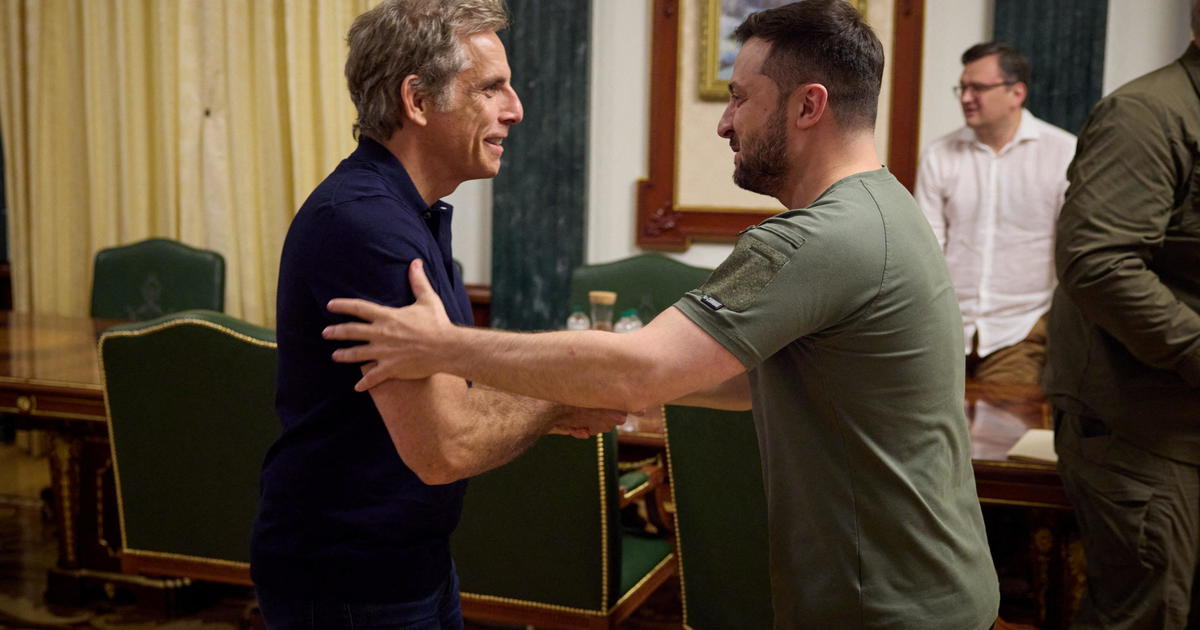 On Monday, Ben Stiller joined a growing list of celebrities who have visited Ukraine to show support during the war with Russia. The country’s department of defense thanked Stiller and other stars, like Angelina Jolie, Sean Penn, Liev Schreiber, “who, despite the danger, have visited us,” the department wrote in a tweet.

Stiller, a Goodwill Ambassador for the United Nations’ refugee agency, UNHCR, visited the country on World Refugee Day. “I’m meeting people who have been impacted by the war and hearing how it’s changed their lives,” he said in a video, posted by UNHCR. “War and violence are devastating people all over the world.”

“Nobody chooses to flee their home,” he said. “Seeking safety is a right and it needs to be upheld for every person.”

During his visit, the actor met with Ukrainian President Volodmyr Zelenskyy. “You’re my hero,” he told Zelenskeyy. “What you’ve done and the way that you’ve rallied the country and for the world, it’s really inspiring.”

Stiller has been supporting the refugee agency since early 2016 and was appointed as a Goodwill Ambassador in July 2018. He has traveled to meet refugees in Germany, Jordan, Guatemala and Lebanon, UNHCR says.

Similarly, Angelina Jolie has also done extensive work with the agency, and visited Ukraine earlier this year. She made a surprise visit to Lviv, and met children who were injured in a Russian missile attack on the Kramatorsk railway station, according to Maksym Kozytskyy, governor of Lviv Regional State Administration.

As people began to flee Ukraine in February, after Russia launched its unprovoked attack, actor Sean Penn was one of the first to travel to the capital city, Kyiv. He was there to record the events happening in Ukraine, the office of the president said in a statement.

Penn wants to show the world what is happening during the invasion, and the office of the president said the country is grateful for him to show courage and honesty, according to the translation of the statement, which was shared on Facebook.

The Oscar-winning actor visited the office of President Volodymyr Zelenskyy and was at a press briefing with the head of state and vice prime minister. The office shared a photo of Penn at the briefing, sitting in the front row, wearing sun glasses. He also visited Ukraine in November 2021 and spoke with the military in Priazov for his documentary.

Another actor, Liev Schreiber, has also done extensive work to support Ukraine, including a visit, where he met Ukrainians in bomb shelters.

Schreiber co-founded BlueCheck Ukraine, an initiative to find, vet and fund Ukrainian nongovernmental organizations. He often uses his social media to share information about the organization and the ongoing war in Ukraine.

He also spoke at the World Economic Forum in Davos, Switzerland in May, following Zelenskyy’s speech. Schreiber, whose grandfather was of Ukrainian and Polish descent, told Reuters: “It’s overwhelming how resilient the Ukrainian people are.”

Caitlin O’Kane is a digital content producer covering trending stories for CBS News and its good news brand, The Uplift.