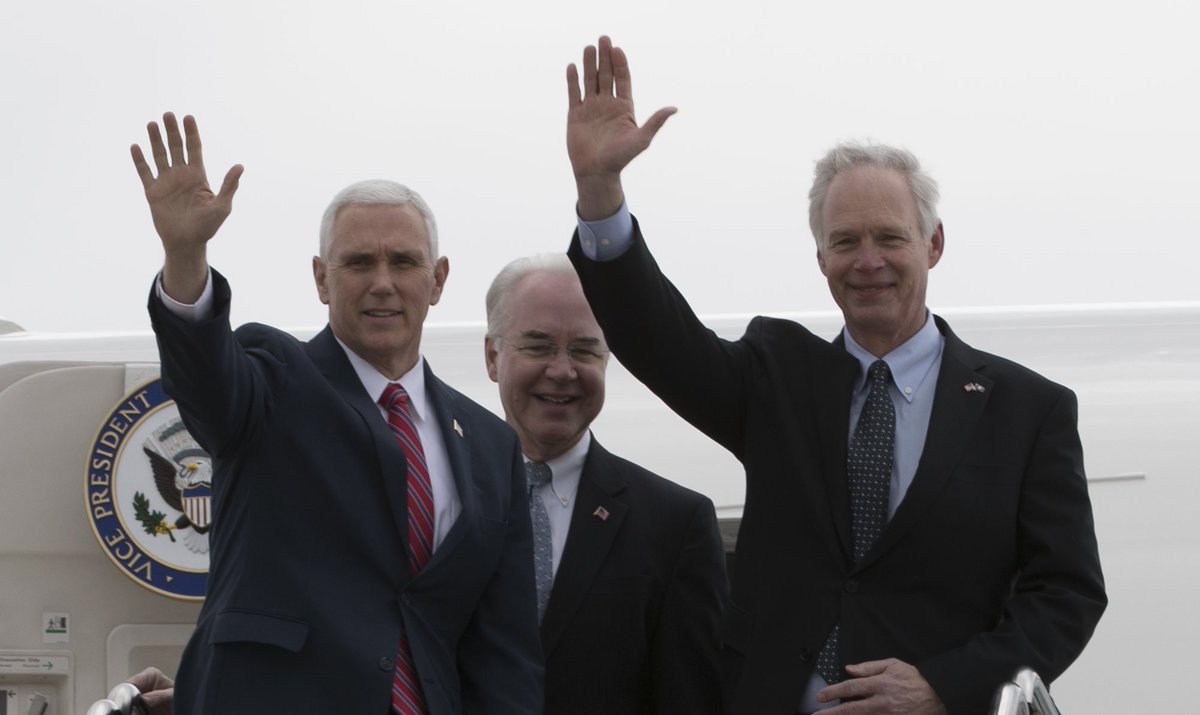 Text messages between staff members for Wisconsin Republican Sen. Ron Johnson and then-Vice President Mike Pence show that Johnson tried to hand over fake electoral ballots for Donald Trump from Wisconsin and Michigan to Pence ahead of the certification of the 2020 presidential election  on Jan. 6, 2021.

Wisconsin was one of seven states won by President Joe Biden where groups of Republicans met in secret on Dec. 14 to cast fraudulent Electoral College ballots for Trump. At the House select committee hearing on Tuesday, committee members shared a text message chain that shows Johnson’s chief of staff attempting to arrange for Johnson to hand over the false ballots from Wisconsin and Michigan three weeks later when the real electoral votes were to be counted and Biden’s victory certified.

“What is it?” Hodgson asks.

“Alternate slate of electors for MI and WI because archivist didn’t receive them,” Riley replies.

“Do not give that to him,” responds Hodgson.

Another text message released by the House committee Tuesday showed Wisconsin Republicans scrambling to respond to Trump supporters’ demands that the fake electoral ballots be sent to Washington in time for the certification.

Mark Jefferson, executive director of the Wisconsin Republican Party, wrote in a text message on Jan. 4 at 9:02 p.m.: “Freaking trump idiots want someone to fly original elector papers to the senate President. They’re gonna call one of us to tell us just what the hell is going on.”

The committee also aired video testimony Tuesday from Andrew Hitt, the former chair of the Wisconsin Republican Party and one of the fake electors who cast the fake electoral ballots for Trump. Hitt, who stepped down as party chair in July 2021, testified that he was unaware his fake electoral vote would be sent to Washington.

“I was told that these would only count if a court ruled in our favor. So that would have been using our electors in ways that we weren’t told about, and we wouldn’t have supported,” Hitt said of the pressure campaign that used the dual states of electors in the seven states as grounds to try to stop certification of Biden’s win.

Mel Barnes, an attorney with Law Forward, a progressive legal firm that has filed a lawsuit against Wisconsin’s 10 fake electors, is skeptical of the claim that the Wisconsin electors did not intend for their votes to be counted on Jan. 6.

“If he and other electors didn’t want these to be counted they shouldn’t have mailed them off to Congress,” she says of Hitt.

Of the seven states that Biden won while Trump supporters sent their own fake slates to Congress — Arizona, Georgia, Michigan, New Mexico, Nevada, Pennsylvania and Wisconsin — only two, New Mexico and Pennsylvania, added the caveat that the Trump electors should only be counted in the event of a disputed election.

Wisconsin’s fake electors did not include any such caveat, and Hitt signed a cover letter accompanying the false electoral ballots as “Chairperson, Electoral College of Wisconsin.”

A registered mail envelope containing Wisconisn’s fake electoral votes, with a return address from the “Chairperson, Electoral College of Wisconsin” and the address, 148 East Johnson Street, of the Wisconsin Republican Party headquarters, is stamped with a tracking number that indicates that they were mailed on Dec. 16 but did not arrive at the National Archives until Jan. 4.

The slowness of mail delivery over the holidays might have spurred Johnson to attempt to deliver the documents in person to Pence on Jan. 6. Or, “another possible read is Johnson wanted to put Vice President Pence in an uncomfortable position on live TV,” says Barnes, “to make these the last votes that were counted or to throw the certification into chaos.”

Johnson’s spokesperson Alexa Henning tweeted Tuesday that the senator had nothing to do with the scheme to create a slate of Trump electors in Wisconsin and that the newly hired chief of staff person was simply passing along a request the office received.

The Vice President’s office said not to give it to him and we did not. There was no further action taken. End of story.

When Wisconsin’s fake electors gathered in the state Capitol in December, they knew that the Wisconsin Supreme Court had already ruled that Biden had won Wisconsin, Barnes points out. At that point the Trump campaign had exhausted its options for recounts and court cases to try to reverse the results, “and they sent these documents anyway,” she says.

As for any controversy among Wisconsin Republicans about how far to go in supporting Trump’s effort to change the results of the 2020 election, “Maybe we’ll learn about it when the suit we filed moves forward and we get to take discovery from the people that we’ve sued.”

Overall, the Jan. 6 House hearings show “how important this is here in Wisconsin and the role our state played in trying to overturn the will of the people,” says Barnes. The public deserves to know what happened in the 2020 presidential election and “who was part of the criminal conspiracy to overturn their votes.”

Law Forward’s lawsuit — the first in the nation against a slate of fake electors — is important, as are the House hearings, Barnes  says: “We know accountability is so important in making sure this doesn’t happen in Wisconsin again.”

GET THE MORNING HEADLINES DELIVERED TO YOUR INBOX