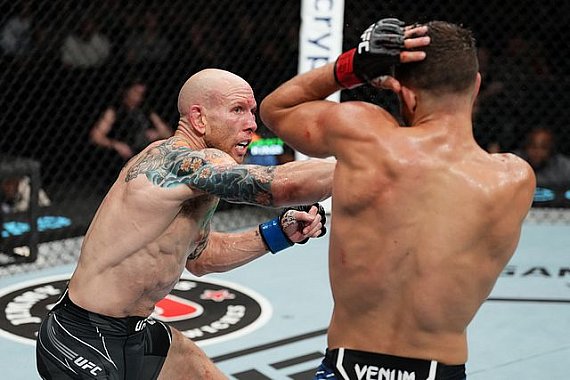 In Josh
Emmett’s mind, the
UFC on ESPN 37 headliner wasn’t a particularly difficult fight
to call.

The 37-year-old Team Alpha Male product emerged from his five-round
clash against Calvin
Kattar with a split-decision triumph at the Moody Center in
Austin, Texas, but he thought his performance warranted a more
definitive result.

“I thought I was going to get screwed,” Emmett said at Saturday’s
post-fight press conference. “I thought I won four [rounds] to one.
I had four to one. At least three to two and when they went split,
I was like, ‘Come on.’ But it worked out in my favor.”

While Kattar held a 130-to-107 edge in significant strikes, Emmett
appeared to land with more impact throughout the fight. Emmett says
a lesser fighter wouldn’t have been able to absorb some of the
blows the way Kattar did.

“Calvin
Kattar is a dog,” Emmett said. “Like I told you guys, I was
ready for a 25-minute war. He’s tough as hell. Usually when I hit
people with those big shots to the head or the body, they’re not
standing there and he was right in the mix coming forward with
those elbows and knees. He has a slick jab. I was so well prepared.
My coaches, everybody, this is our time.”

While a majority of the media scorecards favored Kattar, Emmett had
a very clear picture in mind of which rounds he won. The
difference, he says, was the power behind the punches he
landed.

“The second [round] was close,” Emmett said. “We gave that to him
but I thought I won three, four and five. He was just landing that
jab and then I was landing more power shots backing him up. Nothing
but respect to him, his coaches and his teammates.”

Emmett’s first five-round victory extends his overall UFC winning
streak to five at 145 pounds, and he believes that’s enough to make
him next in line for a featherweight title shot. Regardless, he
plans on being in attendance when Alexander
Volkanovski and Max
Holloway square off for a third time at UFC 276.

“I want that shot,” Emmett said. “The No. 2 and 3 guys are
phenomenal fighters. They fought the top guys, Max
Holloway and Alexander
Volkanovski. We need some new blood in the division and I know
I can compete with them. I’m the best featherweight on this planet,
and I’m ready. I want to be sitting cage side in two weeks to see
who I’m fighting next.”

In Emmett’s ideal world, Volknaovski would improve to 3-0 against
Holloway to set the stage for a championship clash down the
road.

“So I think this solidifies who is the best. It doesn’t really
matter, but Volkanovski is a phenomenal champion,” Emmett said.
“He’s on a 20-fight something win streak and I think him and I
match up really well.”