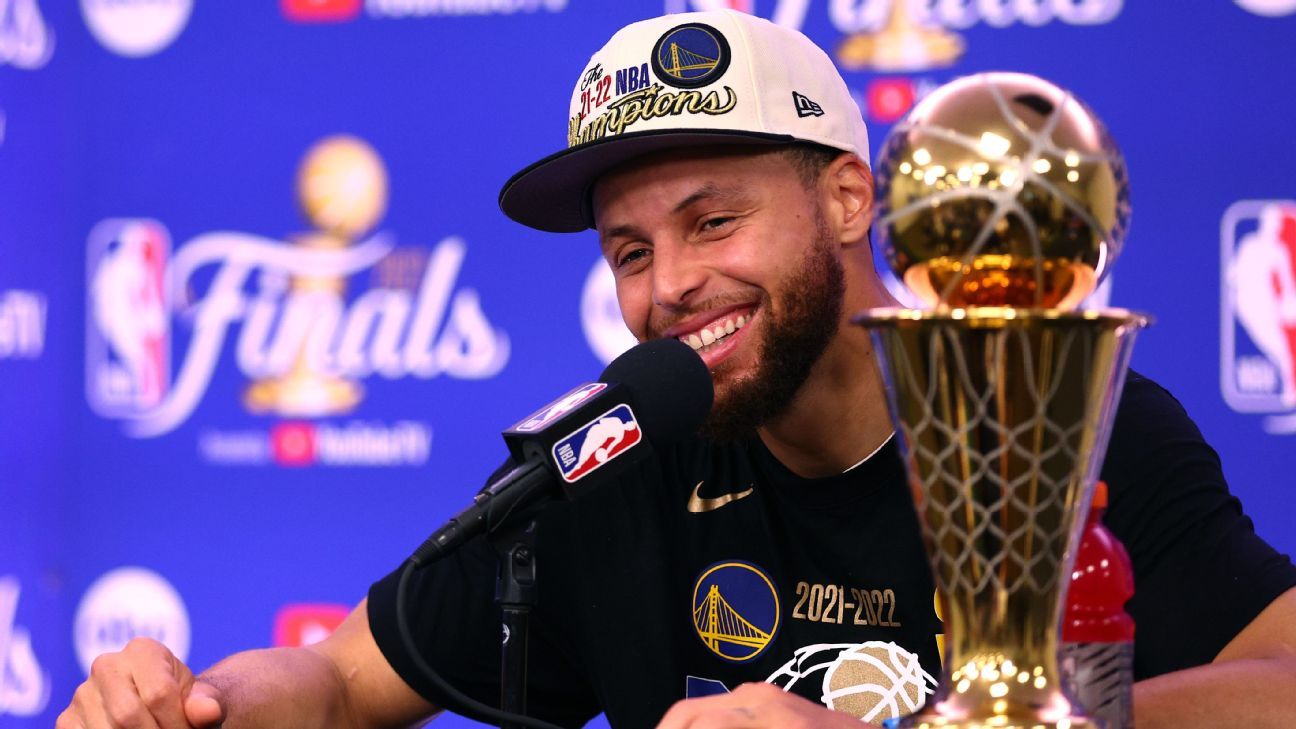 BOSTON — Stephen Curry pulled up from 29 feet out and buried another 3-point dagger before pointing to his right ring finger in the third quarter of Game 6 of the NBA Finals on Thursday night.

Underneath Boston’s historic championship banners and on the Celtics’ hallowed parquet floor, Curry didn’t just put another ring on it — he cemented his future Hall of Fame legacy by joining an exclusive, legendary group with his first NBA Finals MVP trophy.

Curry won his fourth championship and the one honor that had eluded him when he was unanimously named the Bill Russell NBA Finals Most Valuable Player after leading the Golden State Warriors to a 103-90 win to eliminate the Boston Celtics on Thursday. As the final seconds ticked off, an emotional Curry broke down in tears before needing to sit down on the court.

Afterward, Curry saw Bay Area rapper Mistah F.A.B. and shouted out, “What are they gonna say now, boy?” Curry detractors can no longer point to the NBA’s greatest shooter not having a Finals MVP to his name anymore.

“What they gonna say now?” Curry told Andscape’s Marc Spears after the game. “[You] hear all the talk about you as a player and us as a team, nobody outside of the Bay Area thought we would be here last October when the season started. Me as a player, obviously this Finals MVP stuff and all that, knew [we were] good enough to win three championships before.”

Curry then talked about the new Finals MVP trophy in his hand.

“But to have the opportunity to go for a fourth [championship], and to accomplish this goal, too, God is great,” Curry said about the Bill Russell trophy. “Just happy I got to do it.”

After Curry finished with 34 points, seven assists and seven rebounds in the series clincher — giving him 30 or more in three straight games at Boston — he received a phone call from former President Obama congratulating him.

Curry, after all, is only the fifth player to win multiple NBA MVPs, a Finals MVP and a scoring title in his career, joining Kareem Abdul-Jabbar, Michael Jordan, LeBron James and Wilt Chamberlain, according to research from ESPN Stats & Information.

Curry put himself with legendary company by hitting six 3-pointers on Thursday, three coming in the third quarter. One of those was the 29-footer he hit with 6:15 left in the third that pushed the Warriors up by 22, leading him to celebrate by pointing to his ring finger as Boston called a timeout.

Curry’s signature Finals MVP performance, though, came when he swung the momentum of the series with his sensational 43-point, 10-rebound effort in a Game 4 win in Boston to even the series at 2-2. Including that game, Golden State won three straight to win its fourth title in eight years.

For Curry, Game 6 was a legacy game for the point guard. The NBA’s most prolific 3-point shooter now has four rings, two league MVPs, two scoring titles, one Finals MVP and an All-Star Game MVP.

Now debaters can argue where Curry’s place is among the legends of the game and if he is a top-10 player of all-time and one of the greatest point guards ever.

“It helps,” Hall of Fame point guard Isiah Thomas told ESPN about a Finals MVP being vital for Curry’s legacy. “As [Boston’s] Cedric Maxwell said to me the other night, he goes, ‘There’s 32 NBA Finals [MVPs]. I’m one of them.’

“I’m one of them, too. At the end, it does matter. It helps. Steph’s legacy is already cemented, in terms of what he’s done for the game, how he’s improved the game, and what he’s done making all the kids want to play the game [the way he does]. He’s pushed the game forward.”

It has been a record-breaking season for Curry. He became the game’s 3-point king and moved past Ray Allen atop the all-time 3-pointers made list earlier this season.

But his 13th season will be remembered for winning his fourth championship, putting Curry in an elite group that includes only James, Jordan, Abdul-Jabbar, Magic Johnson, Tim Duncan and Bill Russell to win four championships and multiple MVPs.

“I told him after the game, there is nothing else you can possibly do in this game,” Curry’s brother Seth Curry, who plays for the Nets, told ESPN. “It is good to get another championship and top it off with a Finals MVP. That is one of the few things he didn’t have.”

Seth Curry added: “He is in that top 10 all-time individual player debate [now]. Not just shooting. In this Finals he did everything on the floor. … What else can he do?”

Curry was lauded for his defense by his team, holding the Celtics to 0.78 points per play, 38% field goal shooting and 31% contested field goal percentage in the Finals, according to research by ESPN Stats & Information.

And with each series win in the playoffs, Curry let his opponents hear him talk. In the second round, he cited Memphis’ mantra of “Whoop that trick” to ESPN’s Kendra Andrews when asked what the Warriors’ game plan was before Game 5. After Memphis blew out Golden State in Game 5, Curry had 29 points, seven rebounds and five assists to eliminate the Grizzlies in Game 6.

He pulled out his rock-a-bye baby celebration gesture a few times when putting teams away, including one final time this season in Game 6 against Boston on Thursday.

And now Curry can put to bed all the naysayers who pointed out he didn’t have a Finals MVP after Kevin Durant took home the honor twice during the Warriors’ 2017 and 2018 championships and Andre Iguodala was named MVP in the 2015 Finals.

“To stamp [his career] with a Finals MVP — I know he said it don’t matter,” Draymond Green said. “And it doesn’t matter in the sense of like, oh, his legacy is not quite this unless he gets that. Like, that’s garbage. Steph Curry still an all-time great.

“But to add that to your résumé as a competitor, you want that. For him, well-deserved. It’s been a long time in the making. But he left no doubt and he carried us, and we’re here as champions.”

Thomas says this era of basketball is defined by James, Curry and Durant when he looks at the last 15 years. Warriors coach Steve Kerr labeled this fourth championship and Finals MVP as Curry’s “crowning achievement.”

“Honestly, the whole Finals MVP thing,” Kerr said. “It’s like, I mean, are we really — I guess his career has been so impeccable, that’s the only thing we can actually find. So it’s great to check that box for him. But it’s been really hard for me to think that that’s actually been held against him.”