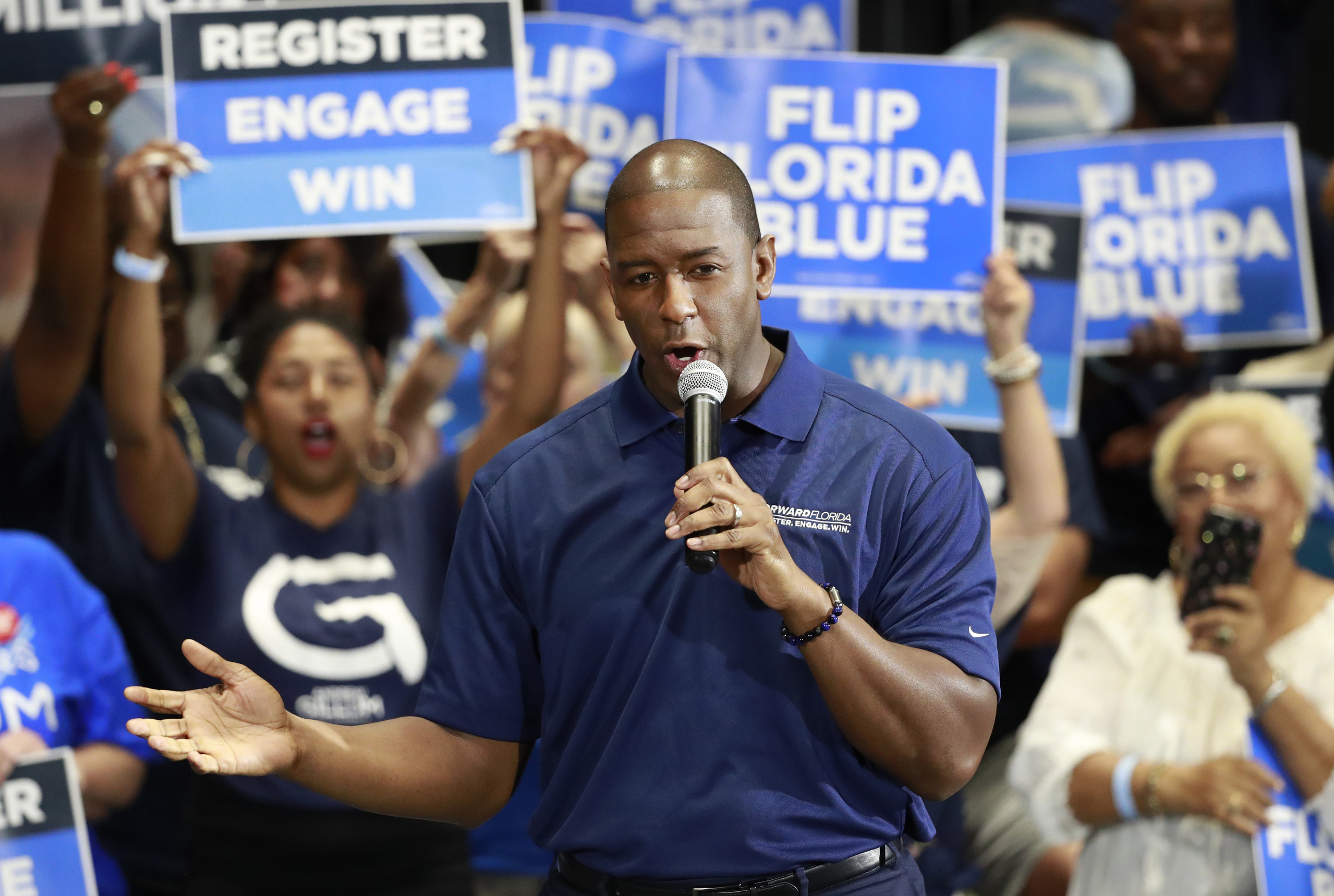 Gillum, among other things, solicited contributions from the undercover agents after promising something “very significant in return,” according to the indictment. Gillum’s adviser, Sharon Lettman-Hicks, also faces 19 counts, including allegations that some of those contributions were funneled to a separate company she operates, P&P Communications, rather than going to help Gillum’s run for governor.

Marc Elias, a well-known Democratic attorney representing Gillum, pushed back on the allegations in a statement he released before the federal charges were made public.

“The government got it wrong today,” Elias said. “The evidence in this case is clear and will show Mr. Gillum is innocent of all charges.”

In his own statement issued through Elias, Gillum, who was taken into custody on Wednesday morning, said he is the subject of political persecution.

“Every campaign I’ve run has been done with integrity,” Gillum said. “Make no mistake that this case is not legal, it is political.”

Gillum and Lettman-Hicks each pleaded not guilty on Wednesday to all charges in Tallahassee federal court.

Gillum wore a blue business suit and was escorted by two U.S. Marshals while wearing handcuffs and a large metallic chain around his waist. Lettman-Hicks used a wheelchair to enter and exit the courtroom and wore a patterned dress. Both declined to discuss the charges during the hearing, only answering briefly to procedural pre-trial questions asked by U.S. Magistrate Charles A. Stampelos, who set a trial for Aug. 16.

Supporters who turned out for Gillum included some of his closest allies, including Tallahassee lawyer Daryl Parks, who declined comment after the hearing.

An hour after the hearing ended, Gillum walked out of the front doors of courthouse. He declined to take questions as he walked to a waiting white Chevrolet Tahoe.

Gillum was once seen as a rising star in Florida Democratic politics, but was hammered with corruption-related attacks during the campaign and lost to DeSantis by roughly 40,000 votes after a recount.

The case was investigated by the FBI, and the indictment, which was first reported by NBC News, was announced by Jason Coody, the U.S. Attorney for the Northern District of Florida and an appointee of President Joe Biden.

In one example outlined in the indictment, a Gillum associate identified as “Individual B” met in January 2017 with two undercover FBI agents in Nashville. The individual asked one undercover agent for $25,000 “in relation to three projects Individual B had proposed” in the City of Tallahassee, and asked the second agent for $75,000 related to “three different projects,” according to the indictment, which does not specify who “Individual B” is or what work was being considered.

One month later, the total $100,000 campaign contribution request was agreed to by an undercover agent and Gillum during a meeting in Jacksonville, and would be paid in two separate installments of $50,000 each. During that meeting, Gillum directly told one of the undercover FBI agents that he should “separate in his mind the campaign contributions and the Tallahassee projects.”

During a meeting that summer with FBI agents, which took place months after Gillum had already announced his gubernatorial bid, Gillum allegedly promised city contracts in return for political contributions.

“During the conversation, Gillum falsely represented that Southern Pines representatives never offered Gillum anything or gave to Gillum anything, and that Gillum stopped having communications with Southern Pines representatives about the campaign contributions following their attempt to link the campaign contributions to support for potential projects in Tallahassee,” read the indictment.

A federal grand jury has been impaneled since at least November and has interviewed several former Gillum campaign aides, a former aide who was interviewed by the FBI told POLITICO on Wednesday. Among the things federal investigators asked that person about was money contributed by Donald Sussman, a founder and chief investment officer of a Connecticut-based hedge fund and major national Democratic donor.

The person, who was granted anonymity to discuss the matter, did not believe Sussman was being investigated for any wrongdoing — rather, it was to show how a contribution from him to Gillum was the focus of the scrutiny. A Sussman adviser did not return a POLITICO request seeking comment.

Gillum has been the subject of intense scrutiny and political scandal for years, including being forced to remove himself from politics and public life in March 2020 after police found him in a Miami Beach hotel room too inebriated to talk with a male who is suspected to have overdosed. Police found three bags of suspected crystal meth, but Gillum said he’d had too much alcohol to drink but did not do any drugs. Pictures later emerged showing Gillum laying on the floor in his own vomit.

In a national TV interview he did with his wife six months following the incident, Gillum, who has three children, said he was bisexual and expressed remorse.

The city he once led has been under federal investigation since at least 2015, a probe that snared the activities outlined in the unsealed indictment.

Central to that investigation was Gillum’s acceptance of unreported gifts from lobbyists, including a 2016 New York trip referenced in the indictment. During the trip, the undercover FBI agents posing as developers paid for his stay at the Millennium hotel as well as food, drinks, a boat ride around New York Harbor and tickets to the musical “Hamilton.”

Gillum previously faced no criminal charges but agreed to pay a $5,000 fine brought by the Florida Commission on Ethics tied to the improper acceptance of gifts.

Details of the relationship between Gillum and Lettman-Hicks were brought up during Wednesday’s first court appearance. The indictment alleges that Gillum worked for a public relations company owned by Lettman-Hicks, and he continued receiving a salary from the company even though he told state elections officials that he had resigned in order to steer clear of impropriety. Gillum’s campaign headquarters was also first opened at Lettman-Hicks’ office in Tallahassee.

Lettman-Hicks was represented by a public defender, attorney Elizabeth Vallejo, who said on behalf of Lettman-Hicks that she and Gillum were employed by a foundation which she did not identified in court.