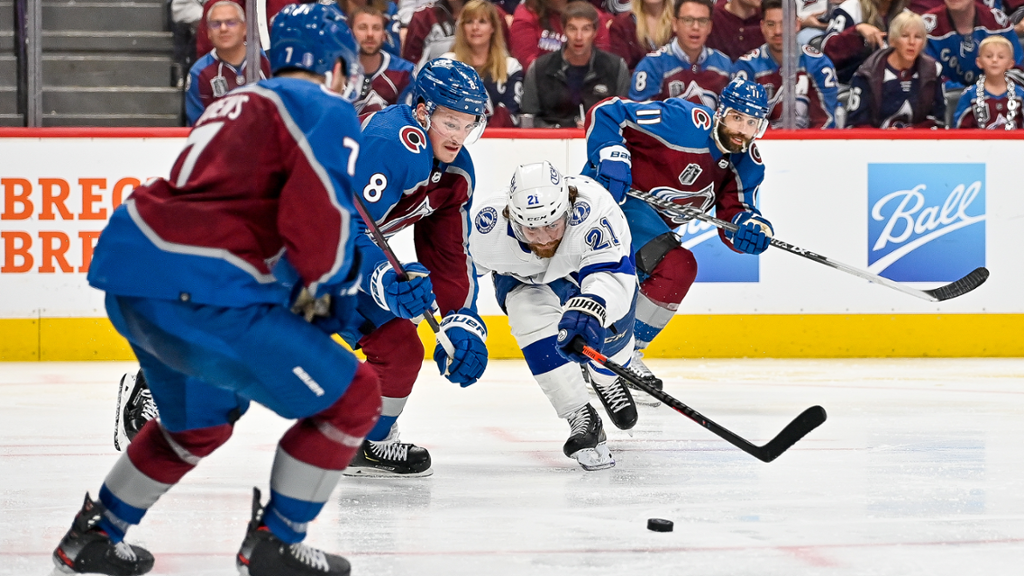 DENVER — The Colorado Avalanche have a simple goal for Game 3 of the Stanley Cup Final: replicate how they played in a 7-0 victory against the Tampa Bay Lightning in Game 2 on Saturday.

“I was really impressed with our team’s performance last night,” coach Jared Bednar said before the Avalanche departed for Florida. “I thought they were dialed in [in] all aspects of our game, highly engaged and energized and we had a good night.

“But [if] it’s 7-0, 1-0, it doesn’t really matter. It’s one performance. We need four or more great performances because you’re going to have to have a great performance to win in the Stanley Cup Final and we’re halfway there with two wins.

“We’re going to have to play some really good hockey here going forward. We know the job’s going to be that much tougher going into Tampa.”

With period leads of 3-0 and 5-0 on Saturday, the Avalanche kept attacking in waves. And when they didn’t have the puck, they were successful in getting it back most of the time. Colorado limited Tampa Bay to 16 shots on goal and 29 shot attempts.

“We had the puck a lot,” Avalanche defenseman Erik Johnson said. “I think that was a lot of it. We forechecked really, really well. We played as a connected five-man unit all over the ice. Our forecheck was probably the key.

“When [our] guys on offense are pressuring the way that they have, it’s tough to play against. So I think right from the get-go our forecheck was on and I think that made the biggest difference.”

The Avalanche have frequently used quick pressure to turn the puck over. Though they say it’s not the primary strategy, there has been an element of physicality to their game. Tampa Bay has played more games in the playoffs this season (19 to Colorado’s 16), and more postseason games over the past three (67 to 41).

“Obviously, that’s a big thing about the playoffs,” said forward Mikko Rantanen, who had three assists in Game 2. “We don’t really think about the fact that they’ve been playing long seasons the last two years. We’re just kind of going at it with a simple plan, as Erik said. Forecheck has to be a factor, and our speed, and last night we did it. They had some trouble breaking the puck out and we just have to keep doing the exact same thing.”

The Avalanche have won 14 of 16 games in the 2022 playoffs and, given how decisive their victory was in Game 2 of the Stanley Cup Final, they say their guard will be up ahead of Game 3 regarding a couple of potential issues.

One will be overconfidence.

Johnson said Colorado is aware that Tampa Bay is 7-1 at home in the playoffs, versus 5-6 on the road.

“We know they’re going to be a lot better team at home than when they are on the road, so we expect to get their best games here in [Games] 3 and 4. From our standpoint nothing changes,” he said. “Our mindset has been the same all year long, all playoff long, so what are we confident about? We haven’t won anything yet. Our mindset is the exact same as it’s been all playoffs.”

Another issue could be adjustments. Teams are always making them, but Bednar said Sunday he has little to no temptation to try to fix something that isn’t broken.

“I could use that game as a template,” said Bednar, regarding Game 2. “That’s the game we’ve been trying to get to all along. I think we’ve gotten there at times in the past. We were dialed in to what we were supposed to do but then we shot the puck well. We hit our targets. We were able to beat [Lightning goalie Andrei] Vasilevskiy.

“Sometimes we play well, and we don’t finish off our chances like we did last night. It all came together for us last night. We’ll go out and try to repeat or better that performance here in Game 3. That’s our goal.”